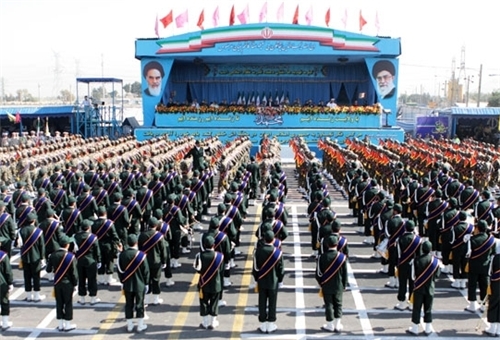 “The Islamic Republic of Iran’s Armed Forces are the cause of stability in the region and Iran is no threat to the neighbors and the other regional states; actually those who have ignored all international rules and regulations are threatening the region,” Rouhani said, addressing the Iranian Armed Forces during the annual military parades staged to mark the start of the Week of Sacred Defense, commemorating Iranians’ sacrifices during the 8 years of Iraqi imposed war on Iran in 1980s.

Reminding the fact that Iran has never initiated a war against another country, he said, “The Islamic Republic’s Armed Forces are powerful, but their power is deterrent and defensive.”

Rouhani underlined Iran’s opposition to war, and said, “We consider ourselves as the victims of war, aggression and its damaging effects and aftermaths.”

At the parades, the Iranian Armed Forces displayed the country’s latest home-made military tools, weapons and equipments, including tactical troposcatter communications system as well as optimized Sky Guard and high-altitude S-200 missile systems, during the massive annual military parades which started in Tehran on Sunday morning.

The ceremony took place at the mausoleum of the Founder of the Islamic Republic, the Late Imam Khomeini, in Southern Tehran.

During the parades, the Iranian armed forces displayed the tactical troposcatter system which is an advanced home-made communications system unveiled by Commander of Khatam ol-Anbia Air Defense Base Brigadier General Farzad Esmayeeli earlier this month.

Defense analysts and military observers say that Iran’s wargames and its advancements in weapons production have proved as a deterrent factor, specially at a time of heightened threats by Israel and its western allies.