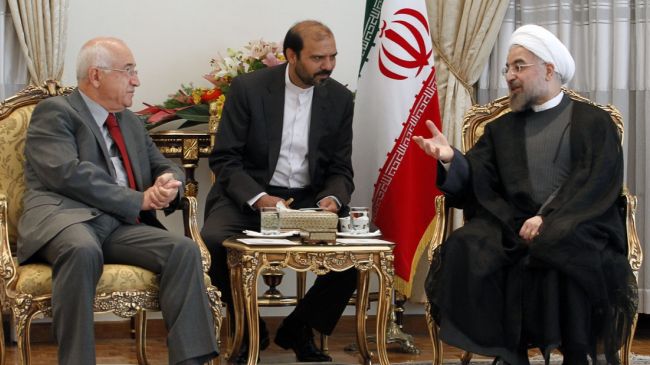 Iran President Hassan Rouhani says no country will benefit from continued unrest and instability in Syria, stressing the importance of consultations with Turkey over the issue.

The possibility of Syria’s disintegration, the victory of terrorists and even the continuation of civil war and instability in the Arab state would not be beneficial for either side of the conflict, Rouhani said in a meeting with Turkish Parliament Speaker Cemil Cicek in Tehran on Sunday.

“Intensified extremism, and religious strife, and particularly terrorism … are dangers that threaten both countries (Iran and Turkey),” the Iranian president stated.

He added that despite the different approaches taken by Iran and Turkey to the developments in Syria, both countries have common goals and interests regarding the Arab state.

“The Islamic Republic of Iran and Turkey are two influential regional countries which can play a more effective role in the region, particularly in resolving regional crises, through close cooperation and interaction,” Rouhani pointed out.

He said Tehran and Ankara seek to increase the volume of economic exchanges to 30 billion dollars by 2015, adding that the use of Iranian and Turkish currencies would accelerate bilateral trade.

The Turkish parliament speaker, for his part, said war and conflict in the region would be detrimental to all regional countries, adding that his country’s foreign policy seeks an immediate end to war and bloodshed on the basis of dialog.

Turkey defends territorial integrity of all regional countries and believes that conflict and disintegration of states in the region would only serve the interests of foreign powers, Cicek explained.