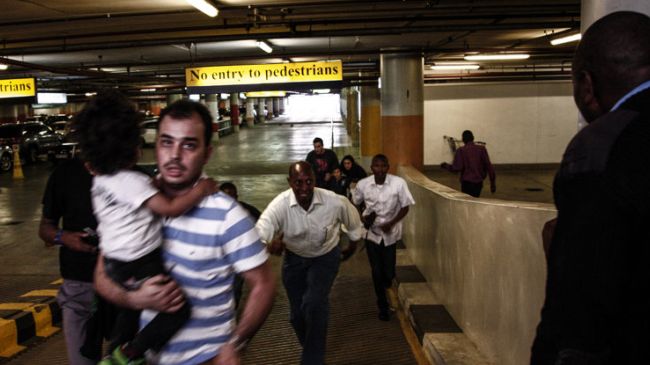 Kenyan security officials say gunmen are still holding hostages inside a shopping mall in Nairobi where they have already killed dozens of people.

The Kenya National Disaster Operation Center said that the attackers were holding an unknown number of people in Nairobi’s Westgate shopping mall while security forces continued their operation against the militants on Sunday morning, 12 hours after the assault began.

“Operations are continuing,” said a Kenyan security officer at the scene.

“We will free all those inside and stop this, of course we cannot give details of the operations except to say that everything that can be done is being done,” the official added.

In a televised address on Saturday, Kenyan President Uhuru Kenyatta said at least 39 people had been killed, including close members of his own family, and more than 150 others injured in the attack.

Kenyatta said Kenyan security forces were “in the process of neutralizing the attackers and securing the mall”.

He added, “We shall hunt down the perpetrators wherever they run to. We shall get to them and we shall punish them for this heinous crime.”

“They want to cause fear and despondency in our country, but we will not be cowed,” Kenyatta said, referring to Somalia’s al-Shabab fighters who claimed responsibility for the assault and warned the Kenyan government to withdraw its troops from their country.

“We have warned Kenya of that attack, but it ignored (us), still forcefully holding our lands … while killing our innocent civilians,” Rage said.