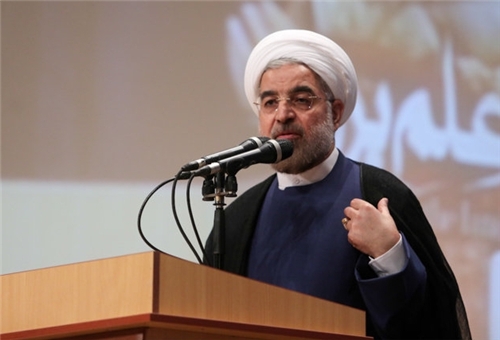 Iranian hardliners appear to have given their tacit support to president Hassan Rouhani as the moderate cleric prepares to travel to New York on what could be a critically important visit to the United Nations, which may include a historic meeting with his American counterpart.

Hawkish fundamentalists, including the elite Revolutionary Guards close to the supreme leader, Ayatollah Ali Khamenei, have refrained from demonstrating opposition to Rouhani’s new bid to pursue “constructive engagement” with the international community. This could include talks over Iran’s controversial nuclear programme and the Syrian conflict. The Iranian president is keen to show the world that he has a united country behind him.

Khamenei, long a fierce critic of the US, has thrown his weight behind Rouhani, apparently giving his blessing for direct talks between Rouhani and President Barack Obama, which could take place on the sidelines of the UN General Assembly this week. And Iran’s opposition activists and politicians, given new heart after Rouhani’s victory in June, appear to share support for the new president in his attempt to improve relations with the west.

Saturday’s headlines in Tehran reflected the mood of growing optimism in Iran, where even the hardline press such as Keyhan, an ultra-conservative newspaper whose director is directly appointed by Khamenei, appears to be welcoming the possibility of a historic meeting that can put an end to Tehran and Washington’s three decades of animosity. “I have no plans, but it’s possible,” was Keyhan‘s headline, quoting Rouhani on the possibility of a meeting with Obama. In a further sign that Rouhani has full authority, the Revolutionary Guard issued a statement offering support for his administration.

Mohammad Ali Abtahi, the former vice-president of Iran under the reformist president Mohammad Khatami, told the Observer that he saw Rouhani’s trip as “the most important visit” to the UN by an Iranian president in “the most exceptional circumstances”. “On one hand, Rouhani has the support of the supreme leader, on the other, the US has to come to terms with its mistakes in dealing with Iran in the past,” he said. By mentioning mistakes, Abtahi was referring particularly to the time, under Khatami, when President George Bush labelled Iran as part of “an axis of evil” along with North Korea and Iraq, despite Khatami’s reformist administration.

Rouhani’s visit contrasts with those made by his predecessors, Abtahi said, because “conservatives are not sabotaging and not expressing opposing views”.

Zahra Eshraghi, a reformist politician and a granddaughter of Ayatollah Ruhollah Khomeini, the founder of the 1979 Islamic revolution, echoed Abtahi, saying that conservatives have come to the realisation that Iran needs constructive relations with the international community. “Given our experience with sanctions recently, especially our difficulties with importing medicines, hardliners have also come to terms with the need for dialogue with the United States,” she told the Observer.

“The events in the region in the past two years [a reference to Syria] shows that Iran remains as a regional power and the US, too, needs to have dialogue with Iran” she added. “The time has come for the two countries to put aside the mutual distrust and act on their national interests.”

On Monday morning in New York, the stage management and hype gives way to bargaining, as Mohammad Javad Zarif sits down for the first time as Iran’s foreign minister with Lady (Catherine) Ashton, the EU’s foreign policy chief to gauge how far Iran has really come in from the cold. Zarif is to meet William Hague, the British foreign secretary, as well, and may have a staged brief encounter with the US secretary of state, John Kerry, in some UN corridor during the week-long general assembly. Whatever happens, the atmosphere will almost certainly be an improvement on what has gone before.

Zarif’s predecessor as Iran’s delegate, Saeed Jalili, was a dry bureaucrat inclined to read out convoluted didacticpresentations, apparently scared to stray from the script written in Tehran. Any hint of ambiguity or spontaneity sprouted long delays while he phoned for instructions.

Zarif could not be more different; he is a skilled diplomat and is fluent in English. Moreover, everything that Zarif and Rouhani have said suggests that he, unlike Jalili, has full authority to negotiate, while Rouhani will paint the bigger picture at the general assembly of an Iranian republic trying to break free of its pariah status.

The question now is how these experienced diplomats play their hand. At the lower end of expectations, the Iranians will spread bonhomie and make a date for serious nuclear negotiations in the coming weeks, involving the cumbersome format of the past few years that has kept the international community more or less on the same page, but with little real progress. That format puts diplomats from six powers – US, UK, France, Germany, Russia and China – on one side of the negotiating table with Ashton, acting as their convenor. Iran sits opposite them, wary and combative.

However, there is some reason to believe that the main players will aim for something more imaginative. Rouhani and Obama are both in a hurry to score a success. Rouhani is at the start of a honeymoon period in Tehran that will be measured in months, not years. Obama, at the other end of his presidency, faces a slide into lame duck status.

Both men know, as do all the other players in this tortuous game, that if there is to be a deal it will ultimately be hammered out between Washington and Tehran with the other five nations acting as facilitators. If they sense an opening, they could cut out the middle men – and woman – and head straight to bilateral talks. If that is in the air, expect to see an historic handshake this week – which would be the first between a US president and a leader from the Islamic Republic of Iran.

However, there will be bumps along the way. Informal bilateral contacts could proceed in tandem with the multilateral negotiations, if only to keep Russia and China engaged. Or the multilateral track might give way at some point to a bilateral endgame. Whichever route is taken, it is a negotiation in which everyone at the table has a fairly clear and widely shared vision, of the outcome: an Iran empowered to continue its nuclear programme but under internationally dictated limits.

The country would be allowed to enrich uranium without the burden of sanctions, but only up to a maximum of 5% purity – enough to make reactor fuel, not weapons. The world’s nuclear watchdog, the International Atomic Energy Agency (IAEA), would have a stronger inspection mandate, allowing it to examine not just the facilities Iran declares it has but also sites it suspects could be harbouring secret weapons work. Iran would also have to give up its stock of 20% uranium, currently the main proliferation concern because of the ease with which it could be further spun into weapons-grade fissile material.

There could also be some understanding on what happens at Arak, where a heavy water reactor is under construction that could produce plutonium, another possible fuel for a bomb. But that might be left for another day. Slow progress at the site has meant it will not be opening early next year as planned, giving the negotiators some breathing space.

Even if the parties to the talks have a shared sense of where they are going, getting there will be complicated. Rouhani will want sanctions relief up front so that he can return to Tehran in triumph and widen his own political window of opportunity. If not, the loose leash that Khamenei has allowed the president could be yanked back. Khamenei is making the right noises, but there is still no certainty he has made the strategic decision to bottle up the nuclear programme.

In November 1979, months after the establishment of the Islamic republic under Khomeini, students stormed the US embassy in Tehran and took 52 diplomats hostage for 444 days.

In the hope that Iran’s post-revolution state would be fragile, Iraq invaded Iran in September 1980, triggering the longest conventional war of the last century. The US supported Iraq, and Iran complains that the Americans turned a blind eye to the use of chemical weapons by Saddam Hussein’s forces.

In July 1988, 290 passengers on board an Iranian flight from Tehran to Dubai were killed after the plane was shot down by a missile fired from the USS Vincennes. The US has maintained that it was a mistake.

Since 2003 the US has expressed concerns that Iran’s nuclear programme might have military dimensions. In 2003, Iran halted its enrichment of uranium and allowed more scrutiny of its nuclear activities.

The new Iran under Rouhani