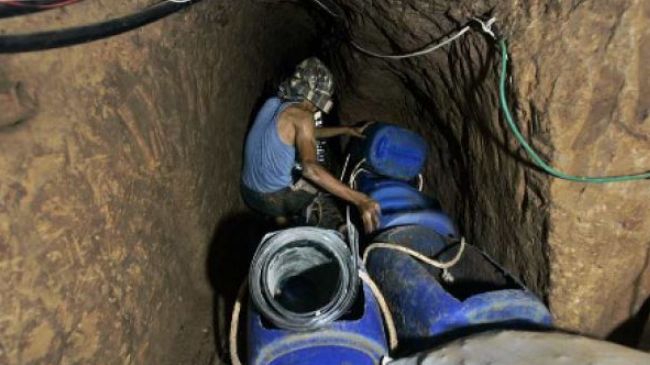 A Palestinian man receives goods from Egypt through a tunnel underneath the border in Rafah refugee camp, southern Gaza Strip July 29, 2008.

The Palestinian minister of economy says that losses resulting from Egypt military destruction of tunnels along its border with the besieged Gaza Strip have exceeded $250 million.

Alaa al-Rafati told local media on Friday that the humanitarian crisis in Gaza has entered a “critical and dangerous phase” since Egypt has closed the Rafah border crossing and is destroying the tunnels serve as a lifeline for Gaza’s population of over 1.7 million.

According to al-Rafati, the Egyptian army has destroyed nearly 126 border tunnels, which have been used to get basic goods and medicines into Gaza during years of suffocating Israeli blockade.

Al-Rafati further called on the Egyptian government to reopen the Rafah crossing and allow the movement of people and goods through it.

More than 80 percent of the tunnels are no longer functional following their destruction by the Egyptian security forces.

Over the past months, Egypt has stepped up its crackdown on the supply tunnels leading into Gaza, which bring basic supplies to the Gazans in the besieged enclave. Egyptian army forces flooded several of tunnels in February.

Since the ouster of Egypt’s President Mohamed Morsi on July 3, the Egyptian military has launched a campaign to destroy the tunnels, preventing the people in Gaza from bringing in most of their basic goods like construction materials, food, and fuel.

The destruction of the tunnels has reportedly led to an increase in the price of fuel and other commodities in the coastal territory. Palestinians have to wait in long lines at gas stations and face daily power outages that last up to 14 hours.

Several human rights organizations and civil groups have criticized the Egyptian army for preventing the people in Gaza from accessing most of their basic goods like construction materials, food, and fuel.