Possible US war on Syria to last a decade, Gordon Duff says 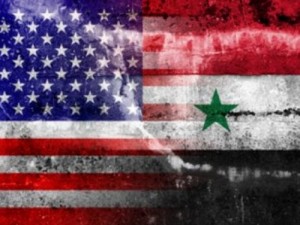 If the United States falls into Israel’s trap and starts a war against Syria, the conflict is likely to last for more than a decade, a US political commentator says.

“If the Obama administration does engage in a war against Syria, and I believe that is Israel’s policy, that war will last more than a decade,” Gordon Duff, a senior editor at Veterans Today, said in an interview with Press TV on Wednesday.

“The initial policy that we recognize was an attempt to balkanize Syria to create an al-Qaeda-led state on the border between Iraq and Syria and use that to overthrow” the Iraqi government and destabilize Iran, Duff added.

The former American marine warned that Israel’s “policies have morphed into something far more severe, a regional chaos at the risk of a world war. They are pushing the United States into a direct military confrontation with Russia.”

On Monday, the United Nations issued a report by UN investigators, which said sarin nerve agent was used in the attack that allegedly killed hundreds of people. The UN team’s mandate did not include assigning blame for the attack.

A day later, Russian Foreign Minister Sergei Lavrov said that the UN report proved that chemical weapons had been used, but it failed to answer a number of questions Moscow had asked such as whether the weapons were produced in a factory or they were homemade.

Lavrov said, “We have very serious grounds to believe that this was a provocation,” adding that there had been “many provocations” by the militants fighting against the Syrian government and people. “They were all aimed, over the last two years, at provoking foreign intervention.”

Elsewhere in his remarks, Gordon Duff said, “There is an odd coincidence that al-Qaeda, since its founding in documents from the late 1990s, has never said anything threatening about Israel. Al-Qaeda has never attempted an active terrorism against an Israeli-backed entity of any kind.”

“If anything, al-Qaeda has seemingly acted as a surrogate of the Israeli intelligence services all along. Now this can either be seen as a very, very bizarre coincidence or one could read something into Michael Oren’s statement today, and perhaps assume that the relationship between Israel and al-Qaeda is one that is well over 15 years old,” he added.