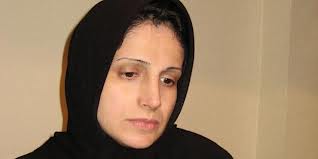 (Reuters) – Newly-released Iranian human rights lawyer Nasrin Sotoudeh said on Thursday she expected President Hassan Rouhani’s government to free hundreds of other people jailed for their political beliefs to show it is serious about reform.

In a tentative sign that hardline policies are being eased in the Islamic Republic following Rouhani’s inauguration last month, authorities freed Sotoudeh and at least 10 other prominent prisoners on Tuesday and Wednesday, according to reports on opposition websites.

Most were linked to mass protests after the disputed re-election of former President Mahmoud Ahmadinejad in 2009.

Authorities have given Sotoudeh no explanation for her release, but the timing of the move, less than a week before Rouhani addresses the U.N. General Assembly in New York, indicated it was aimed at allaying the West’s concerns about Iran’s human rights record ahead of the session, analysts said.

Sotoudeh told Reuters she expected the release of others detained for their political activities during Ahmadinejad’s presidency, which she said numbered some 300 men and women.

“We are waiting for all political prisoners to be freed,” Sotoudeh said by phone from Tehran. “This has occurred very late, and not all prisoners have been released,” she said.

“My expectation is that the process that has started will continue,” she said. “If it does not continue, it means that this was a move made for appearances. But I am extremely hopeful that this will continue.”

She said she had thought she would be released much sooner following the June election of Rouhani, a centrist cleric who pledged during his campaign to ease political and social restrictions at home.

Sotoudeh said she believed opposition leaders Mirhossein Mousavi and Mehdi Karoubi, who disputed Ahmadinejad’s re-election in 2009 and have been under house arrest since 2011, would be released soon as well.

Sotoudeh was arrested in 2010 and sentenced to six years in prison on suspicion of spreading propaganda and conspiring to harm state security, charges believed to be linked to her defence of high-profile journalists and activists, including Iranian Nobel Peace Laureate Shirin Ebadi.

Sotoudeh was also a member of Ebadi’s Centre for Human Rights Defenders, which gave free legal representation to people they considered prisoners of conscience and documented human rights abuses. It was shut by authorities in 2008.

Rouhani is scheduled to address the assembly on September 24, and analysts said they expect him to present the face of a new Iran more open to cooperation with the West than under the bellicose Ahmadinejad.

Officials in the West, which has imposed tightening sanctions on Iran over its disputed nuclear programme, welcomed Sotoudeh’s release.

“The release of the prisoners provides an opening for a start of a frank and eye-to-eye dialogue with Iran on human rights and other important issues,” said Tarja Cronberg, a member of the European Parliament, in a statement on Thursday. “Such dialogue is long overdue.”

Sotoudeh said on Thursday that she planned to continue her legal advocacy work. Part of her sentence included a ban on practicing law for 20 years, and authorities have not said whether the prohibition has been repealed.