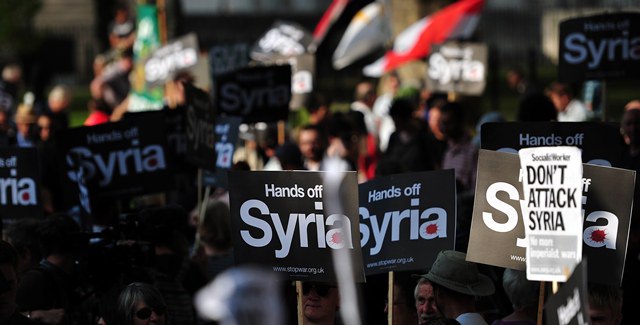 US fails to gather support for Syria military strike: Analyst

Talking to IRNA Dr. Pervaiz Iqbal Cheema, Dean of the Faculty of Contemporary Studies at the National Defense University (NDU) said that even Britain and some other US allies did support the military action against Syria.

“The strike would further complicate the situation in Middle East,” he warned.

He said that parliament of Britain which is the right hand of US did not voted for any military action against Syria.

Dr. Pervaiz Iqbal Cheema said that there is debate going on in US about the repercussions of attack against Syria. “It looks that Obama has failed to convince Americans and Congress that a military strike on Syria is justified,” he said.

The expert on international affairs expressing his views said that the problem of US is that the country does not respect the rights of other states in the world. “The hatred against US in the Muslim world is on the rise,” he noted.

Dr. Pervaiz Iqbal Cheema added that that SCO and G20 meetings have proved to be platforms in stopping US military strike on Syria. He said that the SCO and G20 member states are fully aware of the negative impacts of the war in the Middle East.

He praised the role of Iran for restoring peace in Syria. He said that Iran has always stressed for dialogue to resolve crisis in Syria. He noted that war is not the solution for any issue. “War can only buy some time but it cannot solve the dispute,” said the analyst.

Pervaiz Iqbal Cheema is also a scholar of international repute. His articles have regularly appears both in national as well as international academic journals, popular magazines and daily newspapers.