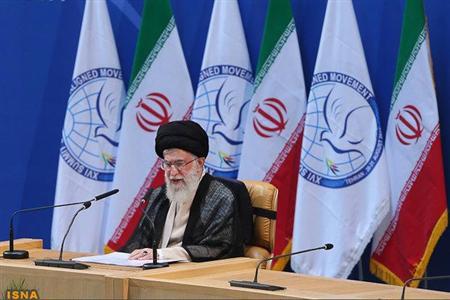 (Reuters) – Talk by Iran’s Supreme Leader of “flexibility” days before his government’s debut at the United Nations General Assembly in New York suggests a new willingness at the highest level to explore a compromise solution to Tehran’s nuclear row with the West.

Western governments are intrigued, but wary.

It is unclear how much bargaining room Ayatollah Ali Khamenei, an unyielding promoter of Iran’s nuclear program, would allow his negotiators, whether in secret talks with Washington or in multilateral discussions with major powers.

But the timing of his remarks, days before his new president and foreign minister meet Western officials on the sidelines of the annual U.N. General Assembly, sends a message that the West should expect, and reciprocate, a new desire to clinch a deal.

His comments, to an audience of the Revolutionary Guards, were also aimed internally, signaling to powerful security hardliners at home that they should not seek to torpedo any forthcoming attempt at negotiations, diplomats and analysts say.

Khamenei was quoted by ISNA news agency as saying: “I agree with what I years ago called heroic flexibility, because this is sometimes a very good and necessary move but with sticking to a basic condition.”

“Sometimes a wrestler shows flexibility for technical reasons but he doesn’t forget who his opponent is and what his real goal is.”

To one Iran expert, Baqer Moin, the speech was exceptional. It “opens a new chapter in Iranian internal and external relations and may prove to be as important as Ayatollah Khomeini’s acceptance of the ceasefire with Iraq in 1988.”

“Rouhani can now negotiate with the U.S. without worrying that he might be undermined by his hardline opponents,” he said.

Mehran Kamrava, an Iran expert at Georgetown University in Doha, said Tehran perceived a window of opportunity for meaningful negotiations.

Ten years of talks between Tehran and world powers on Iran’s nuclear activities, eight of them during the term of former hardline president Mahmoud Ahmadinejad, ran continually aground, bereft of mutual confidence and dogged by historical suspicions.

The United States and its allies believe Iran is seeking a nuclear weapons capability, and have imposed sanctions aimed at stopping it. Iran denies it wants a bomb and says its nuclear program has peaceful aims.

“All the signs of change in direction need to be grasped, but what counts are acts. We are not there yet and need to be attentive,” said a French diplomatic source.

A CHANGE IN TACTICS ONLY?

A Tehran-based diplomat said there had been a significant change of mood in the government but the real question was whether Rouhani would bring any new initiative to New York.

“Khamenei’s words indicate that Iran may have a bit of space to compromise but it’s very unclear how much that will be. It’s unclear whether this is a change in negotiating tactics or preparing for Iran to compromise,” the diplomat said.

The Western message that Iran’s more conciliatory language needs to be backed up with concrete action was underlined by the United States, France, Britain and others at this week’s annual gathering of the International Atomic Energy Agency in Vienna.

Speaking to reporters on Monday after the head of Iran’s Atomic Energy Organization, Ali Akbar Salehi, said he saw an “opening” in the nuclear dispute, U.S. Energy Secretary Ernest Moniz, said: “The proof will be in the pudding … The words have to be followed by concrete action.”

Rouhani and Foreign Minister Javad Zarif do not have carte blanche to cut a deal — any agreement would have to be approved by Khamenei — and in any case they must first settle the arrangements under which any new talks would happen.

But diplomats and Iran watchers said that, after the often fractious Ahmadinejad years, the new tone was refreshing, and that was important for encouraging discussion and communication.

The United States and Iran cut diplomatic relations in 1980, after students and Islamic militants stormed the U.S. Embassy in Tehran and took American diplomats hostage.

But since the election of Rouhani, a centrist cleric who defeated more conservative candidates, in June, officials from both countries have made increasing hints that they are open to direct talks to seek an end to the decade-long nuclear dispute.

Peter Jenkins, UK representative to the IAEA from 2001-06, now a partner in a negotiation consultancy, The Ambassador Partnership, said Khamanei’s remarks showed Rouhani and Zarif had “his blessing to do what’s needed to get an agreement”.

Jenkins described Zarif as “one of the most skilful diplomats of his generation and someone to whom the need for flexibility in negotiation is a given”.

Most of the action in New York would be talks about talks, Jenkins said, perhaps setting up secret talks between Iran and the United States. “Both parties understand that it’s the pair of them that most need to agree on the nuclear question.”

In Israel the reaction among Iran watchers was cool.

To Uri Lubrani, who served as Israeli ambassador in Tehran before the Iranian revolution, Khamenei’s praise of flexibility was a way of paving the way for Rouhani to hold “protracted” nuclear talks. But Rouhani had not changed Khamenei’s views or outlook, he said, referring to Khamenei’s strong support for Iran’s nuclear program.

Israel, believed to be the only nuclear-armed state in the Middle East, has said it is keeping all options open to prevent Iran amassing enough uranium to fuel one nuclear bomb.

Jenkins said he expected strong Israeli opposition to any deal. “I think we are going to see the Israelis bending over backwards in coming weeks and months to try to derail any negotiation,” he said.