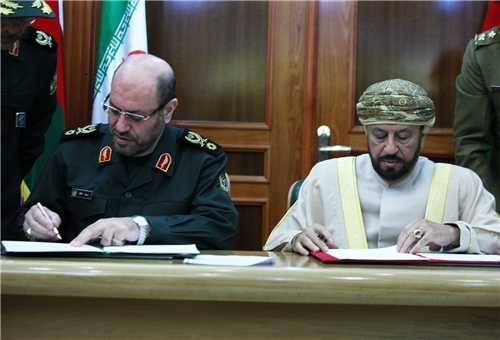 TEHRAN (FNA)- Iran and Oman signed a memorandum of understanding (MoU) on Tuesday to boost their mutual cooperation in the defense sector.

The Omani minister’s visit takes place at the invitation of the Iranian defense minister.

During a meeting in Tehran on Tuesday, Dehqan and Harib al-Busaidi explored avenues for bolstering and reinvigorating bilateral ties, specially in the defense fields.

The Iranian defense minister pointed to Iran-Oman defense ties as a model of constructive and effective interaction, and said, “We should try to spread this trend to other regional countries.”

Harib al-Busaidi, for his part, also described Iran-Oman defense ties as very good and constructive and pointed to the recent visit of Oman’s King Sultan Qaboos to Tehran, and said, “The two countries’ leaders have always paid special heed to these relations and they have underlined strengthening of bilateral relations in line with the two countries’ interests and wills.”

The Omani minister responsible for defense affairs also visited an exhibition of Iran’s defense capabilities during his stay in Tehran.

Iran attaches great importance to the consolidation of its ties with the Persian Gulf littoral states, specially Oman, to maintain security in the region.

Oman’s King Sultan Qaboos was in Tehran late in August for a three-day visit to meet with senior Iranian officials.

Sultan Qaboos, who was the first foreign leader visiting Iran since Iranian President Hassan Rouhani ascended to power, headed a high-ranking political and economic delegation during his visit to Iran.