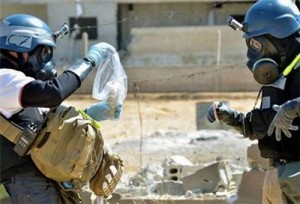 TEHRAN (FNA)- Syria’s ratification of the Chemical Weapons Convention (CWC) brings the number of nations on the planet who aren’t participants down to six, and is bringing some uncomfortable new attention to the one right beside Syria: the Zionist regime of Israel.

Israel responded to Syria’s ratification by ruling out doing the same, insisting that they would never agree to abandon even this portion of their WMD stockpile unless every country on the planet agreed to sign permanent peace deals with them, Antiwar.com reported.

Former Defense Minister Amir Peretz addressed the situation again on Monday, saying that Syria’s agreement to scrap its chemical arsenal had nothing to do with Israel.

Israel is on the outside looking in with an awful lot of such treaties, repeatedly refusing to sign the CWC, the Nuclear Non-Proliferation Treaty (NPT), and the recent ban on cluster munitions, and has often come under criticism for its stances that it uniquely is entitled to spurn international law with regard to such deals.