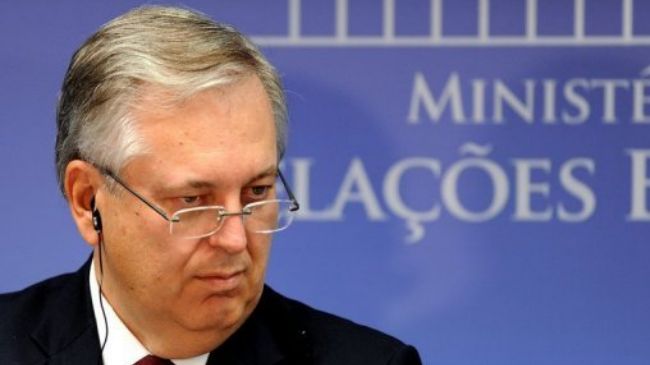 Brazil urges UNSC to end inflow of arms into Syria

Brazil has urged the United Nations Security Council to order an immediate end to the inflow of arms into Syria from abroad.

“It is urgent to immediately stop the flow of arms from the outside…,” Brazilian Foreign Minister Luiz Alberto Figueiredo said on Monday, adding, “Undoubtedly we would like the Security Council to agree on ending this arms flow.”

Censuring any use of chemical weapons, Brazil’s chief diplomat stressed Brasilia’s support for a deal reached by Washington and Moscow on Syria’s chemical weapons arsenal.

“The use of chemical weapons is a dreadful and inadmissible act,” Figueiredo said.

The talks in Geneva came following a proposal by Russia to Syria that the latter put its chemical weapons under international control. Syrian Foreign Minister Walid Al-Muallem said on September 9 that his country “welcomes” the Russian offer, which was prompted by an apparently off-the-cuff comment by US Secretary of State John Kerry.

Brazil’s foreign minister also voiced opposition to any possible military intervention in Syria and called for a political solution to the crisis in the Middle Eastern country.

“There is no military solution to the Syria conflict (…) It is time to invest in diplomacy to seek a durable peace,” he said.

The recent war rhetoric against Syria first gained momentum on August 21, when the militants operating inside the Arab country and the foreign-backed Syrian opposition claimed that over a thousand people had been killed in a government chemical attack on militant strongholds on the outskirts of Damascus.