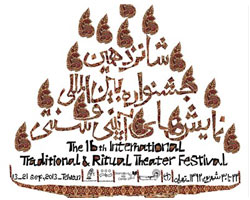 The opening session of the 4 th International Seminar on Ritual Traditional Performances was held in the presence of Arts Deputy of Culture and Islamic Guidance Ministry Ali Moradkhani and professors and researchers in the field.

According to the report, Secretary of the Seminar Hamid Reza Ardalan said: “In the early term of the festival some 18 to 22 groups participated which were mainly traditional performers and for this reason academic artists did not participate. Today and in the course of ritual traditional festival we could revive different forms of puppet show, tea house performances and Torna game and gradually attract the attention of those received education in this field, Many of the participants in this festival are young people and thanks to the festival, ritual traditional performances were protected.”

He added: “Research works which previously has no chance for presentation are now presented and due to holding this research seminar many books and articles have been printed and put at the disposal of those interested. One of the best memento of ritual traditional festival is honoring the artists which is being repeated in other festivals as well.”

The fourth International Seminar of Ritual Traditional Performances was opened in Tehran on September 13 and would continue up to September 15.