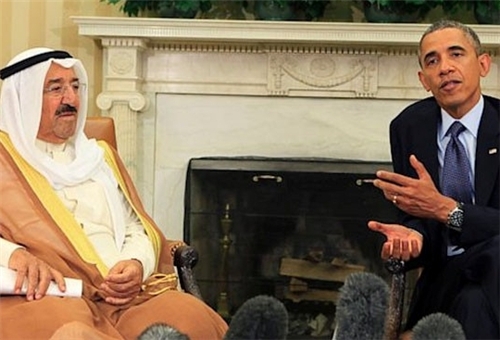 TEHRAN (FNA)- Kuwait’s Emir Sheikh Sabah al-Ahmad al-Jaber Al Sabah called for a peaceful solution to the two and half years of crisis in Syria, and urged self-restraint to prevent another war in the Middle East.

Sabah made the remarks on Friday during a meeting with US President Barack Obama at the Oval Office in the White House, Al-Alam reported.

On his part, Obama said he is optimistic that the talks between US Secretary of State John Kerry and Russian Foreign Minister Sergey Lavrov in Geneva will produce concrete results.

The Obama administration had to halt its plans to bomb Syria over increasing number of Americans opposing the attack and international calls for calling off its military ambitions due to catastrophic consequences that could be expected of such move.

Damascus has strongly ruled out the accusations, saying the attack was carried out by the militants themselves as a false-flag operation.

“We agreed that ultimately what’s needed for the underlying conflict is a political settlement that allows ordinary Syrians to get back to their homes, to rebuild and to relieve the enormous suffering that’s taking place,” Obama noted.