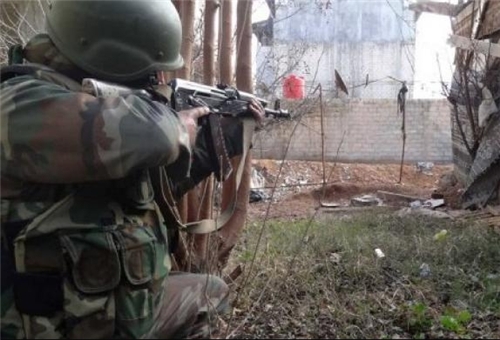 TEHRAN (FNA)- The Syrian army continues its mop-up operations against the militants inside the historic Christian town of Maalula, a security source in Damascus said.

Army troops have killed a number of Al-Qaeda-linked militants in the historic Christian town of Maalula Thursday, Al-Alam reported.

The army troops were also pursuing some militant groups in the town, a security source in Damascus said.

“The army continues to advance in Maalula to defeat the militants,” the source said on condition of anonymity, describing “pockets of resistance,” including snipers, inside the town.

He said recapture of the ancient town was difficult because of its geography — the town is nestled in the side of a cliff, making it an easy target for those stationed above it.

The army entered Maalula on Wednesday after militant groups, including members of the foreign backed Al-Nusra Front, have seized the town several days earlier.

State television broadcast images of military vehicles and troops inside the town, which was virtually deserted.

Most of residents have fled, with many taking refuge in the neighboring town of Ain al-Tineh, and others travelling to Damascus, 55 kilometers (34 miles) away.

Picturesque Maalula is considered a symbol of the ancient Christian presence in Syria.

Its people are among the few in the world who speak Aramaic, the language of Jesus Christ.

The town, home to around 5,000 people, is strategically important for the militants, who are trying to tighten their grip around the capital and already have bases South and West of Damascus.

Maalula could also be used as a launching point for attacks on the highway between the capital and Homs, a key army supply route.