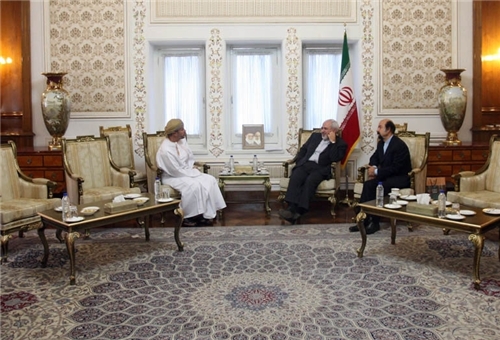 Araimy made the remarks in a meeting with Iranian Foreign Minister Mohammad Javad Zarif on Wednesday.

In the meeting, he appreciated Iranian officials’ cooperation during his mission here, and underlined his country’s officials, specially Sultan Qaboos, firm intention on deepening the relations.

He hoped that trend of expansion of ties between Tehran and Muscat will continue strongly by executing the agreements and joint plans in different fields.

Zarif, for his part, appreciated outgoing ambassador’s efforts during his mission here which was in direction of expansion of mutual ties between Tehran and Muscat, and wished him success.

He added that the two countries of Iran and Oman have always had strategic and very good relations and there is no obstacle in trend of development of bilateral ties.

Iran attaches great importance to the consolidation of its ties with the Persian Gulf littoral states, specially Oman, to maintain security in the region.

Oman’s King Sultan Qaboos was in Tehran late in August for a three-day visit to meet with senior Iranian officials.

Sultan Qaboos, who was the first foreign leader visiting Iran since Iranian President Hassan Rouhani ascended to power, headed a high-ranking political and economic delegation during his three-day visit to Iran.