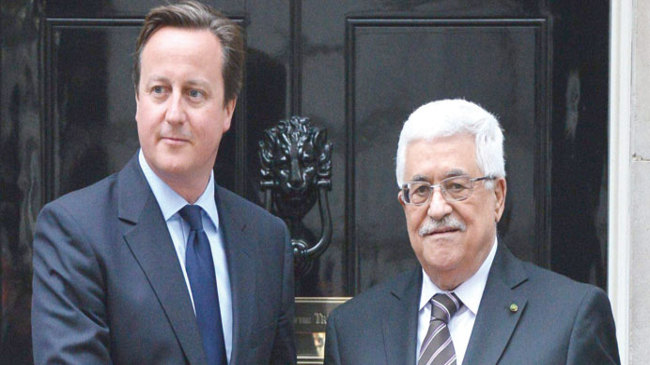 In a meeting in Downing Street on Wednesday, the two sides exchanged views on the fresh round of negotiations, which are aimed at ending the decades-long Palestinian-Israeli conflict based on the so-called two-state solution after a three-year hiatus.

The British premier also expressed opposition to plans by the Israeli regime to expand illegal settlements in the occupied Palestinian lands.

“The UK would strongly oppose unilateral provocations on either side and would continue its strong opposition to Israeli settlement activity in the Palestinian Territories,” Cameron said.

Abbas also met British Deputy Prime Minister Nick Clegg and Labour party leader Ed Miliband in his official visit to the UK and then headed to the French capital city of Paris.

Palestinians are seeking to create an independent state on the territories of the West Bank, East al-Quds (Jerusalem), and the Gaza Strip and are demanding Israel to withdraw from the occupied Palestinian territories.

Tel Aviv, however, has refused to return to the 1967 borders and is unwilling to discuss the issue of al-Quds. The presence and continued expansion of Israeli settlements in occupied Palestine has also created a major obstacle for the efforts to establish peace in the Middle East.