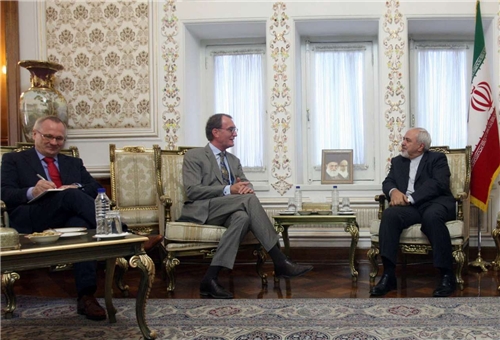 TEHRAN (FNA)- Iranian and Dutch officials in a meeting in Tehran underlined the necessity for the further development of relations between the two countries.

The issue was raised in a meeting between Iranian Foreign Minister Mohammad Javad Zarif and Netherlands’s new Ambassador to Tehran Johans Duma who submitted a copy of his credentials to Zarif on Wednesday.

In the meeting, Zarif, referred to the good historical ties between the two countries, and said that Iran and the Netherlands have high potentials for expansion of relations in different fields.

Reminding Iran’s role and stance in the region, Zarif said that Iran has great capacity for cooperation in different fields of politics, economy and trade with Europe.

The new envoy conveyed warm greetings of Netherlands foreign minister to his Iranian counterpart, and underlined the good and age-old ties between the two countries.

Duma hoped for expansion of mutual relations, and stressed his country’s readiness to continue bilateral talks.