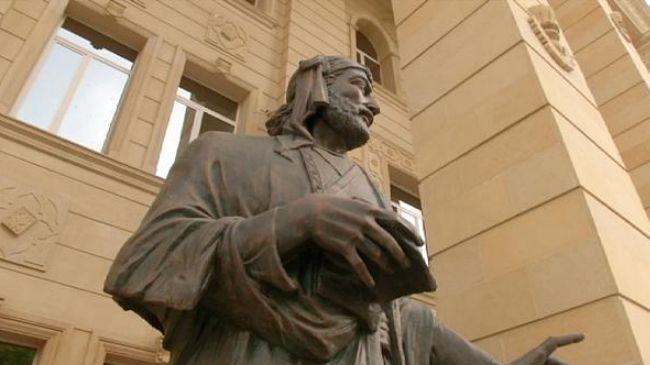 Following a lengthy silence on criticisms over the destruction of Persian inscriptions at the tomb of famous Iranian poet Nezami Ganjavi, Baku has falsely claimed that the renowned literary figure is of Azeri origin.

“He (Ganjavi) was born in Azerbaijan and Azerbaijani people are proud of him. It can’t even be discussed,” Abdullayeve was quoted as saying in an APA report.

This is while the Azeri official refused to offer any explanation for the destruction of Persian inscriptions of Ganjavi’s poems at his mausoleum in Ganja and their replacement with fabricated Azeri inscriptions.

According to the report, the Republic of Azerbaijan has, in a bid to distort his Iranian identity, banned the recitation and translation of those of Ganjavi’s poems in which he has praised the grandeur of Iran.

As part of its anti-literary efforts, Azerbaijan removed from Ganjavi’s mausoleum a number of tiles bearing Persian inscriptions of his poems nearly two months ago under the pretext of restoration work.

This is while Iran’s previous Foreign Ministry Spokesman Abbas Araqchi had expressed regret over Azerbaijan’s reported move at Nezami Ganjavi’s mausoleum during a briefing on August 19.

The Azeri government, meanwhile, has been waging an extensive campaign to falsify the identity of the renowned 12th-century Persian poet, whose official name was Jamal ad-Din Abu Muhammad Ilyas ibn-Yusuf ibn-Zakki.

Moreover, in 2012, the Heydar Aliyev Foundation, which is run by Azerbaijan’s First Lady Mehriban Aliyeva, paid Rome City Municipality € 110,000 to install a monument of Nezami in the Villa Borghese Park in the Italian capital.

Baku has introduced Nezami as an Azeri poet in all the country’s text books.
This is while Nezami has not written any poems in Azeri, and the Republic of Azerbaijan gained independence from Russia only 22 years ago.