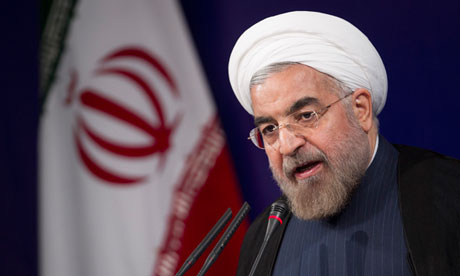 “I think that we are fully ready to hold serious talks with the world, with the G5+1 (five permanent UN Security Council members plus Germany) and the IAEA,” Rouhani said in a televised interview with Iran’s state-run TV channel one on Tuesday night.

He stressed Iran’s commitment to the international rules and the Non-Proliferation Treaty (NPT), and said, “I believe that if the other side shows serious intention, the nuclear issue will be solved in a not far future.”

Rouhani underscored the necessity for respecting the Iranian nation’s rights, and said, “Enrichment in Iran’s territory is one of the inalienable rights of the Iranian nation, of course, within the framework of the international rules, under the IAEA supervision and in pursuit of peaceful goals, and if countries have some concerns, we will obviate them as we are seeking mutual trust, mutual respect and equal rights in this regard.”

The Iranian president said his election by the Iranian people has provided a new chance for a peaceful and negotiated settlement of Iran-West nuclear standoff, “but this opportunity won’t remain in place forever. We will make use of this opportunity and the world should also take this chance”.

“The time for the settlement of Iran’s nuclear issue won’t be unlimited,” he reiterated.