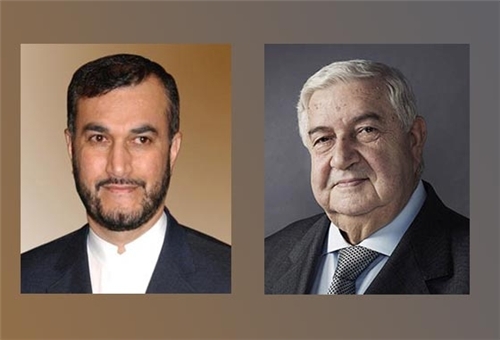 TEHRAN (FNA)- Tehran and Damascus held talks over the Monday proposal of Russia to put Syria’s chemical stockpile under international control in a bid to prevent another war in the Middle-East region.

In a meeting in Moscow on Tuesday, Iranian Deputy Foreign Minister Hossein Amir Abdollahian and Syrian Foreign Minister Walid al-Mualem discussed the latest developments in the crisis-hit Syrian, particularly a new initiative by Russia trying to prevent serious threats of another destructive war in the region.

“Damascus and Tehran believe that Russia’s proposal must put an end to hostilities against the Syrian people and to measures which are taken to support the terrorist and Takfiri groups in the country,” Amir Abdollahian said.

“Damascus and Tehran believe that although Moscow’s initiative provides all sides with an appropriate political opportunity to resolve the Syrian issue peacefully, the entire region must become free of all kinds of weapons of mass destruction,” Amir Abdollahian added.

US President Barack Obama said on Tuesday that he will stop a US plan to strike Syria if the country agrees with the Russian proposal to surrender its possible chemical stocks to international control.