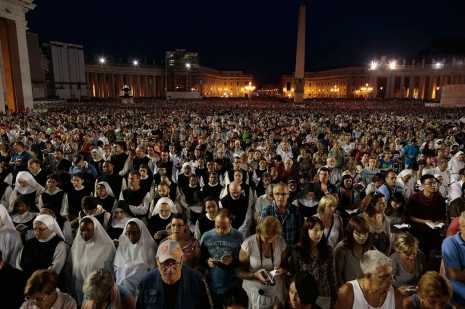 Up to 100,000 peopled rallied in St. Peter’s Square at the Vatican for a four-hour peace vigil late Saturday, urging U.S. and world leaders to choose a path of peace rather than war to resolve the current conflict in Syria.

“May the noise of weapons cease!” Pope Francis told the massive crowd. “War always marks the failure of peace. It is always a defeat for humanity.”

“Violence and war are never the way to peace!” he said.

Meanwhile, in Washington the Obama administration began distributing video of what they say shows the chemical weapons attack on August 21st in Syria, of which the administration has accused the Assad regime in an ongoing bid to convince a skeptical and war-weary American public, as well as a largely undecided Congress, that yet another U.S. military intervention is necessary.

However, as the Associated Press points out on Sunday, the public has “yet to see a single piece of concrete evidence produced by U.S. intelligence — no satellite imagery, no transcripts of Syrian military communications — connecting the government of President Bashar Assad to the alleged chemical weapons attack” beyond the grainy footage that was circulated to major media outlets and shown to members of Congress over the weekend.

Additionally, yet another report questioning the legitimacy, or at least accuracy, of the White House’s narrative was released in a German newspaper on Saturday, suggesting a chemical weapons attack did happen but not by the orders of Assad himself and perhaps against his wishes.

Syrian government forces may have carried out a chemical weapons attack close to Damascus without the personal permission of President Bashar al-Assad, Germany’s Bild am Sonntag paper reported on Sunday, citing German intelligence.

Syrian brigade and division commanders had been asking the Presidential Palace to allow them to use chemical weapons for the last four-and-a-half months, according to radio messages intercepted by German spies, but permission had always been denied, the paper said.

This could mean Assad may not have personally approved the attack close to Damascus on August 21 in which more than 1,400 are estimated to have been killed, intelligence officers suggested.

In response to such concerns, the Obama administration has unleashed itself upon major news outlets. Obama’s chief of staff Denis McDonough is making the rounds amongst the Sunday talking heads. Obama is scheduled to do the same on Monday and will present his case in a national public address Tuesday night.

So far on Sunday, the administration has toted a peculiar line—that their case for war relies on “common sense” in regards to their accusations against Assad, as opposed to a need for hard evidence.

As part of a major push to win the backing of a divided Congress and skeptical American public, Obama’s top aide made the rounds of the Sunday talk shows to press the case for “targeted, limited consequential action to deter and degrade” the capabilities of Syrian President Bashar Assad “to carry out these terrible attacks again.”

On one show McDonough alluded to the fact that the administration’s certainty does not rely on “beyond-a-reasonable-doubt evidence”:

We’ve seen the video proof of the outcome of those attacks. All of that leads to a quite strong common-sense test irrespective of the intelligence that suggests that the regime carried this out. Now do we have a picture or do we have irrefutable beyond-a-reasonable-doubt evidence? This is not a court of law and intelligence does not work that way. So what we do know and what we know the common-sense test says is he is responsible for this. He should be held to account.

Whether or not the White House is able to make its case and prove to the world that Assad did, in fact, order a chemical weapons attack on his own people, the rally at the Vatican served as a reminder that in no case is war a way to peaceful resolution—and in this case will likely to result in a major military campaign during a fragile and turbulent time for the region—a notion that has been expressed time and time again (and again), but has thus far failed to derail the U.S. military-industrial-complex.

That, however, remains to be seen in this case, as an anti-war sentiment seems to have a strong hold with the American public this time around. Click here for a list of upcoming actions—the largest planned so far will be nationwide protests scheduled for Monday.