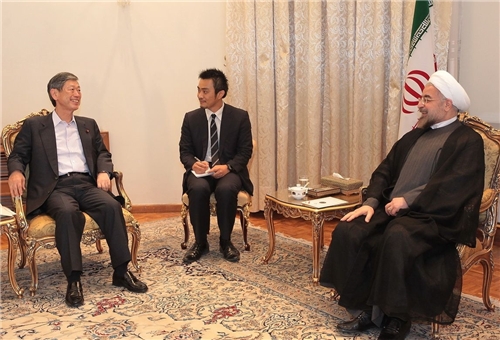 “The new government of Iran is determined to enhance relations with all friendly countries,” President Rouhani said.

Komura submitted a message from Japanese Prime Minister Shinzo Abe to President Rouhani, and said, “The Japanese government is interested in the further expansion of the old-age relations between Tokyo and Tehran.”

President Rouhani expressed his gratitude for the Japanese prime minister’s message, and said, “The Islamic Republic of Iran welcomes the Japanese government’s will and decision for the further development of the bilateral relations.”

In a meeting today, the Iranian minister hoped for Tehran and Tokyo to make use of the existing potentials in order to further expand bilateral cooperation in all areas.

For his part, the Japanese envoy expressed hope the two countries would boost bilateral relations under the new Iranian government.

Komura hoped the existing obstacles would be removed and the two nations would promote the current level of cooperation.

Early in August, officials of Iran and Japan International Cooperation Agency (JICA) in a meeting in Tokyo conferred on ways to further increase cooperation between the two sides in all fields.

The meeting was held between Director General of the Iranian Foreign Ministry for Expatriates’ Affairs Seyed Kazzem Sajjadi and the JICA’s director-general for the Middle-East and European affairs in the Japanese capital at the time.

“The JICA is ready to expand its cooperation with the Islamic Republic of Iran in different fields, including natural disasters management, environment protection and assistance in Afghanistan’s reconstruction,” the Japanese official said.

He also expressed the hope that Iran and Japan would further develop their relations in all fields in the near future.

The Iranian and Japanese officials in 2011 signed a Memorandum of Understanding (MoU) to further increase cooperation between Tehran and the JICA.

The MoU was endorsed during a visit by former Iranian Vice-President for Management and Human Resources Development Lotfollah Forouzandeh to Tokyo.

The MoU compiled in five paragraphs stressed the importance of the training courses held by the JICA in Iran and the necessity for the Iranian trainees to make an optimized use of such courses based on their needs and capabilities.

Established as an independent administrative institution under the law concerning the Independent Administrative Institution, Japan International Cooperation Agency aims to contribute to the promotion of international cooperation as well as the sound development of Japanese and global economy by supporting the socioeconomic development, recovery or economic stability of developing regions.

The JICA in 2007 started the implementation of a project in Iran on the Establishment of Emergency Response Plan for the first 72 Hours after an Earthquake in the Islamic Republic of Iran to enhance emergency response capacity for the priority activities for the first 72 hours after the earthquake.

The Japan International Cooperation Agency, commonly known as the JICA, is an independent government agency which coordinates official development assistance for the government of Japan. It is chartered with assisting economic and social growth in developing countries, and the promotion of international cooperation.