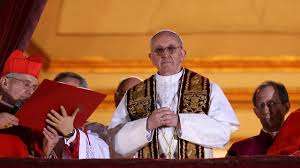 Pope on peace for Syria day: war defeat of humanity

TEHRAN (FNA)- The pope of the Roman Catholic Church described war as defeat for humanity, urging world leaders to pull humanity out of a “spiral of sorrow and death”.

Pope Francis made the remarks on Saturday as he led a mass peace vigil on St. Peter’s Square in the Vatican City in which about 100,000 people participated, Al-Alam reported.

“Violence and war lead only to death, they speak of death! Violence and war are the language of death!” said Francis, who led the world’s 1.2 billion Roman Catholics in a global day of prayer and fasting for peace in Syria.

“War always marks the failure of peace, it is always a defeat for humanity,” he added.

“We have perfected our weapons, our conscience has fallen asleep, and we have sharpened our ideas to justify ourselves. As if it were normal, we continue to sow destruction, pain, death!” Francis said.

“At this point I ask myself: Is it possible to change direction? Can we get out of this spiral of sorrow and death? Can we learn once again to walk and live in the ways of peace?”

On Thursday, the pope wrote to the world leaders attending the G20 summit in Russia, asking them to speak out against a military strike on Syria.

Francis said the talk of war against Syria has prevented a diplomatic solution to the conflict and caused the “senseless massacre” of innocent people in the Arab country.

The war rhetoric against Syria intensified after foreign-backed opposition forces accused the Syrian government of launching the chemical attack on militant strongholds in the suburbs of Damascus on August 21.

Damascus has strongly denied the accusations, saying the attack was carried out by the militants themselves as a false-flag operation.

On August 31, US President Barack Obama said he has decided that Washington must take military action against the Syrian government, which would mean a unilateral military strike without a UN mandate.