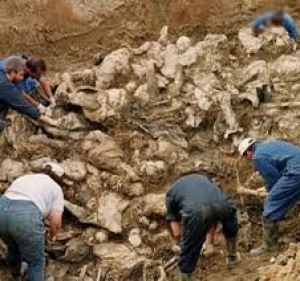 The statement added that the new found grave is one of the largest discovered in the past decade and belongs to mass killings of Muslims of the area in1995.

The latest grave is one of tens of graves that Serbian army used to hide their crimes during attacks on Bosnia. About 3000 innocent people disappeared in Preizdour and so far the bodies of 2000 of them have been identified through the DNA tests.