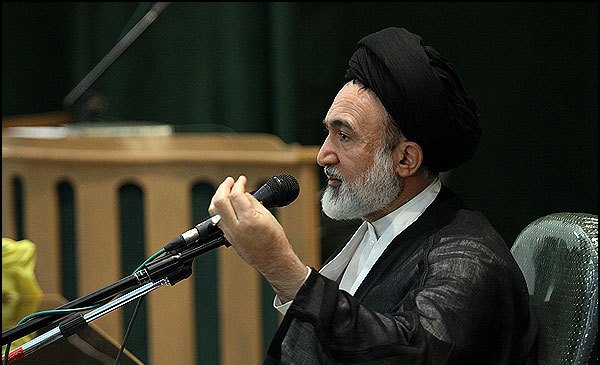 Official calls for exit of extremists from Syria, free election

TEHRAN (Tasnim) – An Iranian official blamed the crisis in Syria on the meddling of foreign powers and said for peace to return to that country, the Takfiri forces must leave Syria and people should be given the chance to decide their own fate in a free election.

The Islamic Republic believes the simmering tensions in Syria must calm down, the Takfiri forces (extremists), who are outsiders, must leave the country, and people be allowed to take part in a free election to determine their own fate, Head of Hajj and Pilgrimage Affairs Organization Hojjatoleslam Seyed Ali Qazi Asgar told Tasnim Saturday.

Qazi Asgar then lashed out at the US, the EU and some “reactionary governments in the region” as well as the Takfiri groups for trying to topple the government of President Bashar al-Assad and bringing a “government of their own choice.”

He denounced the actions of Takfiri groups, and stated,  “All should know what the Takfiris are doing is in conformity neither with Islam, nor the international norms, nor the human values.”

They behead children in front of their parents or shoot people point – blank, no one can approve of such atrocities, he went on to say.

Elsewhere in his remarks, he called the crisis in Syria a “sedition” by Israel, orchestrated with the US help, to ensure security of the Zionist regime.

In similar remarks, the Supreme Leader of the Islamic Revolution Ayatollah Seyed Ali Khamenei had on august 31 described foreign interference as the root cause of the ongoing conflicts across the region.

“The main reason behind the current situation in region is various meddling from outside the region,” Ayatollah Khamenei stated in a meeting with visiting Oman’s Sultan Qaboos bin Said Al Said in Tehran.

The Leader also warned against involving religious and sectarian considerations in the political disputes, and said, “Unfortunately, with some regional countries’ support, a Takfiri group has been shaped which is in conflict with all Muslim groups. But supporters of this (Takfiri) group should know that this fire will burn them as well.”

Ayatollah Khamenei further cautioned against the peril of Israel for the region, stressing, “By possessing massive stockpile of very dangerous weapons of mass destruction, the corrupt Zionist regime (of Israel) is a serious threat to the region.”

The Leader then emphasized the need for “public security” across the region, and stressed that this purpose will be fulfilled only through “an outright ban on weapons of mass destruction” in the region.