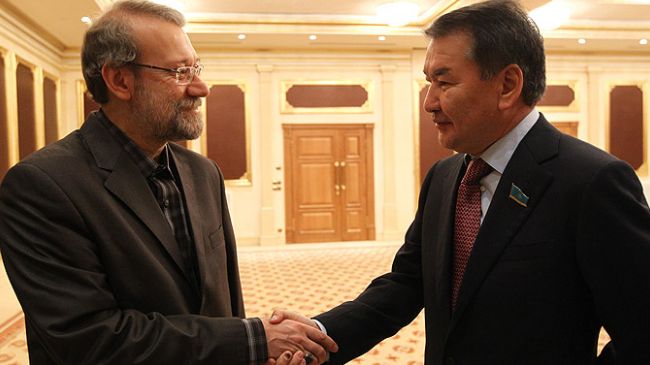 The chairman of Kazakhstan’s Senate has thrown his country’s weight behind Iran’s peaceful nuclear activities, expressing hope that the Western dispute over Tehran’s nuclear energy program will be settled during the tenure of the new Iranian administration.

Kazakhstan has always backed the peaceful use of nuclear energy not only by Iran but by all countries, Kairat Mami said in a Friday meeting with Iranian Majlis speaker Ali Larijani in Turkmenistan.

Larijani and Mami are both on official visits to Ashgabat at the invitation of their Turkmen counterpart Akja Nurberdieva.

The Iranian Majlis speaker, for his part, touched upon the growing relations between Tehran and Astana, calling on both sides to tap into the existing potential to further bolster reciprocal ties.

Larijani thanked Kazakhstan for having hosted two rounds of talks between Iran and the P5+1 group of world powers, namely the five permanent members of the UN Security Council plus Germany.

“Westerners are biased against Iran’s nuclear issue, and we appreciate Kazakhstan’s friendly stance in this regard,” he said.

“On the nuclear issue, we have new proposals and will pursue them to achieve results,” Larijani added.

Iran and the P5+1 group have held several rounds of talks on a range of issues, with the main focus being on Iran’s nuclear energy program. The two sides wrapped up their latest round of negotiations on April 6 in the Kazakh city of Almaty. An earlier meeting had been held in Almaty on February 26-27.

The Unite States, Israel and some of their allies falsely claim that Iran is pursuing non-civilian objectives in its nuclear energy program, with Washington and the European Union using the unfounded allegation as a pretext to impose illegal sanctions on Iran.

Tehran strongly rejects the groundless claim over its nuclear activities, maintaining that as a committed signatory to the Non-Proliferation Treaty and a member of the International Atomic Energy Agency, it has the right to use nuclear technology for peaceful purposes.