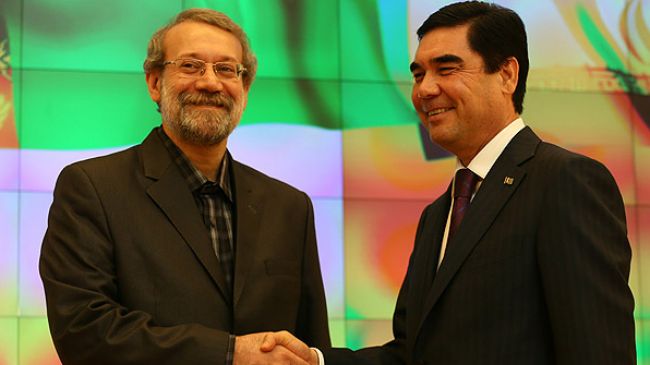 Iran’s Majlis Speaker Ali Larijani says the Islamic Republic and Turkmenistan have common ground on regional developments and both stress the need for the establishment of peace in the Middle East.

“Iran and Turkmenistan have a very close view on the establishment of peace, stability and tranquility in the region,” Larijani said in a meeting with Turkmenistan’s President Gurbanguly Berdymukhammedov in Ashgabat on Friday.

He praised Turkmenistan’s considerable progress during recent years, saying Iran is ready to work closely with the country to contribute to its development.

“Iran is ready to carry out infrastructural projects in Turkmenistan, particularly with regard to roads, refineries, oil and gas,” the Majlis speaker pointed out.

The Turkmenistan president, for his part, lauded the growing trend of bilateral cooperation with Iran on various political, economic and cultural fronts, expressing hope the two countries will witness further expansion of relations.

Larijani and Berdymukhammedov also discussed a protocol to exchange prisoners between the two countries and ways to counter smuggling of narcotics and terrorism.

They agreed that an economic group will follow up discussions on promotion of mutual economic cooperation.

Larijani’s visit comes at the invitation of his Turkmen counterpart, Akja Nurberdiyeva, who visited Tehran in November 2009.

Berdimuhamedow had previously stressed the significance of the visit for boosting parliamentary cooperation between the two countries.

Tehran and Ashgabat have had official diplomatic relations since Turkmenistan’s independence from the Soviet Union in 1991, with Iran becoming the first nation to recognize Turkmenistan as an independent country.