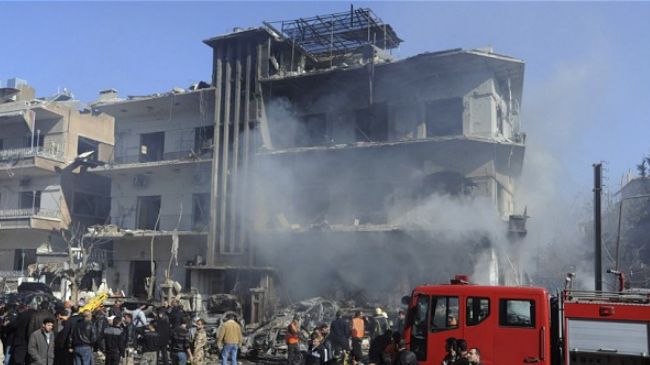 Iran says give peace a chance in Syria

What would the Iranian government do if the U.S. launches a military attack against Syria’s president Bashar al-Assad? Will it retaliate, escalating the situation into a regional or even global conflict? There are signs from Tehran that Syria’s closest ally would actually prefer to resolve the war through diplomacy and distance itself from Assad’s wrongdoings.

Iranian officials and media are expressing mild doubt that Iran can continue its unconditional support for the Syrian government—especially if it’s proven that Assad’s army was behind the August 21 chemical attacks.

“We believe that the big mistakes that have taken place, by the rulers in Syria, unfortunately, have prepared the backdrop for abuse, but we must not forget that these circumstances are being abused,” Iran’s foreign minister Mohammad Javad Zarif said in an interview with Tehran’s reformist weekly Aseman last week.

“Iran can be helpful in resolving the Syrian crisis and bringing the civil war to an end,” Hooman Majd, an Iranian-American journalist and the author of Ayatollahs’ Democracy, told The Daily Beast in an email. “As long as the US goal is not regime change, almost as a precondition, I think the Iranians and the Russians probably see it in their interests to bring the civil war to an end, and help manage the transition to a representative government, as long as that government has no elements openly hostile to Iran, to Shias, or to Russia (such as Al-Qaeda affiliated or sympathetic groups).”

“Iran has shown a willingness, (particularly the new administration in Iran) to be involved in a diplomatic solution—it would make sense for the US to take Iran up on that,” Majd added.

As hard as it might be for U.S. president Barack Obama to push the attack button on Syria, it seems even more difficult for Iran’s new president, Hassan Rouhani, to side with the Assad regime. Confronting the U.S. and other Western countries could eliminate the prospect of any agreement with Washington on Iran’s controversial nuclear program, failing to relieve Iran’s crippling sanctions.

Gholamhossein Karbaschi, a former Tehran mayor close to Rouhani’s inner circles, described Iran’s position on the Syrian crisis to The Daily Beast as “complete neutrality, condemning chemical attacks, and condemning military attacks and intervention by issuing statements.” And there might be other signs that suggest that Iran does not intend to get involved in Syria’s intensifying crisis.

A tape came out this weekend of Iran’s powerful head of the Expediency Council, Akbar Hashemi Rafsanjani, explicitly condemning the Syrian president for using chemical weapons against its own people. The tape infuriated hardliners in Tehran, indicating a huge rift within the leadership on the country’s policy toward Syria.

Opposition to radicalism and a genuine support for patience seems to be the favored advice in Tehran publications.

On her Facebook page, Naimeh Eshraghi, a granddaughter of Ayatollah Rouhollah Khomeini, the founder of the Islamic Republic of Iran, quoted Rafsanjani as having said about the use of chemical warfare in Syria, “A government that throws chemical bombs on its people will experience the harsh consequences of it, just as Saddam brought eternal damnation to himself … and had a horrible ending.”

On Wednesday, Ali Motahari, a conservative member of the Iranian Parliament, confirmed Rafsanjani’s remarks that the Syrian government is responsible for the chemical attack, but added, “condemning chemical weapons bombings does not mean giving permission to the US to attack Syria.”

“Perhaps [Rafsanjani] has information, news, or documents that demonstrate the Syrian government’s chemical attack on its people, and wishes for Iran’s Islamic Revolution not to invest anymore in this issue, but his statements do not mean that he supports a US attack on Syria, and we continue to support the Syrian government,” Motahari added.

Meanwhile, Hossein Mousavian, former head of Iran’s Supreme National Security Council’s Foreign Relations Committee, told The Daily Beast, “Iran is against any type of military strike on Syria because it will not resolve the current dilemma, but will complicate it extensively with regional consequences and beyond.” He continued, “Iran maintains that the Syrian crisis has a political solution and not a military one. I believe an urgent meeting among the world powers and the regional powers, mainly Iran, Saudi Arabia, Turkey, Iraq, and Egypt, is urgent and vital for crisis management in Syria.”

Iran sees the one-week window opened by President Obama to receive congressional approval for a limited military attack against the Syrian regime as a time to accelerate diplomatic efforts to avoid a U.S. military attack.

This past Saturday, an Iranian parliamentary group embarked on a five-day trip to Lebanon and Syria. Their mission is to express “the abhorrence of the Iranian government and nation at the use of chemical weapons” and to publicly declare that “the Iranian government vehemently opposes any foreign military intervention and will do its best to prevent any foreign government from pursuing such a possibility.”

Even Iran’s Revolutionary Guards Corps (IRGC), which has invested enormously in Syria both economically and militarily, has hesitated to use confrontational rhetoric, but issued a mild warning. On Saturday, chief commander of the IRGC, Gen. Mohammad Ali Jafari, said, “The U.S. idea of their ability for a limited military intervention in Syria is nothing but an illusion, and the reactions will surpass the Syrian borders.”

Despite reactions from extremists in Tehran, including registering volunteers to fight in Syria, opposition to radicalism and a genuine support for patience seem to be the favored advice in Tehran publications.

with things that are happening in Syria, and where neither we nor anyone else knows who used the chemical weapon, is a mistake. All our efforts must revolve around making the wisest remarks and position statements during these very days; radical and threatening positions are not necessary.”

Sadegh Zibakalam, a political analyst and Tehran University professor, told The Daily Beast, “If the U.S. launches a limited military strike just to weaken the Assad regime, Iran will not get involved, but if Tehran feels that it is designed to overthrow the regime in Damascus, they will use whatever they have in their power to stop it, in order to save him.”

However, Mousavian, with close ties to Iran’s president, presents a different view. “Iran does not need to retaliate,” he said. “Remember the U.S. invasion of Iraq and Afghanistan. Even if the type of U.S. military involvement may differ, the consequences for the U.S. would be very similar.”

The tone of the influential Akbar Hashemi Rafsanjani, Foreign Minister Mohammad Javad Zarif, and a few other Iranian officials indicates that Tehran is being seriously cautious not to jeopardize future negotiations with the West over the issues of a third country. “Some think that the Americans know everything. But as we saw in both Afghanistan and in Iraq, it so happens that the Americans are not that aware of real conditions and are easily trapped,” Zarif told a weekly Tehran magazine.