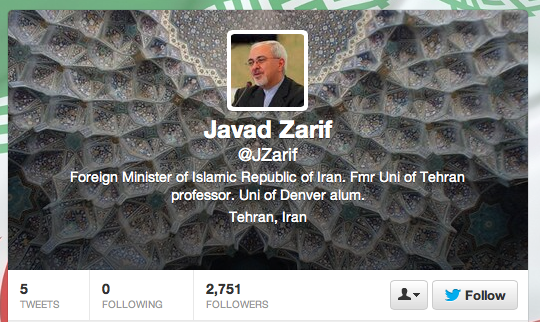 In the wake of Dr. Zarif’s first tweet, many of his over 2,600 followers began retweeting and favoriting the foreign minister’s debut message, with one follower even inviting Dr. Zarif to his house in New York when he visits the United Nations General Assembly later this month.

Of all the many replies, however, the most pointed and amusing by far was a Tweep asking for a “Follow back.” At the moment, Dr. Zarif is not following anyone on Twitter, a condition afflicting Iranian officials that we have documented extensively here at IranWire. But perhaps it is early days, and Dr. Zarif will soon select a handful of accounts to follow, which will surely include former presidents and the Supreme Leader Ayatollah Ali Khamenei (the only senior Iranian politician who does not follow Khamanei is former president Akbar Hashemi Rafsanjnai, surely the only figure who could get away with such high-level Twitter snobbery).

Dr. Zarif’s second tweet was three simple words with monumental meaning: “Happy Rosh Hashana.” This tweet followed that of President Hassan Rouhani, who hours earlier tweeted: “As the sun is about to set here in #Tehran I wish all Jews, especially Iranian Jews, a blessed Rosh Hashanah.” Iranian tweeps and Facbook users went into frenzy at this, retweeting over 3,200 times, and leading Haleh Esfandiari, director of the Middle East Program at the Woodrow Wilson International Center for Scholars, to remark “Not even under the monarchy do we remember such a message.”

Dr. Zarif tweeted twice more on his first active day on Twitter, and both times about Syria. In one, the foreign minister directed his followers to a six-point memo he had previously posted on his Facebook account in English regarding the wider implications of military intervention: “unequivocal rejection of #chemicalweapons, militarism and impermissible use of force. some thoughtshttp://www.facebook.com/jzarif.” The Syria tweets did not produce nearly the same level of excitement as his earlier messages, and were favorited substantially less, with the  Facebook-linked tweet generating only 25 retweets.

But something remarkable happened between Dr. Zarif’s two Syria tweets: the foreign minister directly replied to one of his followers.  Throughout the day of his twittery debut, many followers  tweeted their excitement and pleasure that the Iranian Foreign Minister was tweeting only in English. This led an Iranian follower from the UK to tweet in Persian, “Return to Farsi Mr. Zarif.”

Of all the tweets written in both English and Persian over the past few days in which Dr. Zarif was mentioned in, the foreign minister interestingly felt compelled to reply to this specific tweet. Artfully, Dr. Zarif replied back directly to his follower in Persian, “Hello. I had said that I would write in English on Twitter. Farsi is for (my) Facebook. My apologies my good friend.”

Although President Hassan Rouhani claimed Dr. Zarif “was still learning” when he welcomed him to Twitter a few days ago, it seems that the foreign minister isn’t a Twitter novice after all. Dr. Zarif seemingly understands that by operating his Twitter account mostly in English, his diplomatic reach will be much greater and universal, as the Twitter sphere is driven by news stories and journalists, as opposed to Facebook, which is driven by friends and family, and is more widely used by Iranians both inside and outside of Iran. Two separate social media for two separate audiences.