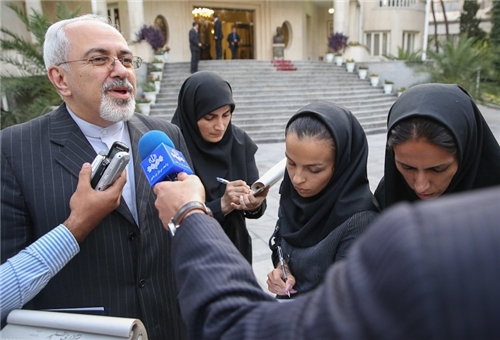 TEHRAN (FNA)- Iranian Foreign Minister Mohammad Javad Zarif said that he has no problem with meeting his British counterpart William Hague on the sidelines of an upcoming UN General Assembly meeting in New York, but meantime underlined that the resumption of the Iran-UK ties depends on London’s behavior.

“We do not have any problem with such a meeting, but what is important is its output,” Zarif said told reporters after a cabinet meeting here in Tehran on Wednesday.

Asked if his possible meeting with Hague can result in improving Iran-UK relations, he said, “This depends on the other side’s behavior.”

They said that Hague has offered his Iranian counterpart Mohammad Javad Zarif to attend bilateral talks on the sidelines of the upcoming annual meeting of the UN General Assembly in New York.

Hague had also earlier called his Iranian counterpart to felicitate Zarif on his appointment as Iran’s new foreign minister.

During the phone conversation on July 31, the Iranian and British foreign ministers discussed ways for improving Tehran-London ties.

Also in July, the British foreign minister underlined his country’s intention to improve relations with Iran.

“We are ready to improve our relations with Iran on a step-by-step basis,” Hague said, addressing the House of Commons’ Foreign Affairs Committee in the British capital, London at the time.

Relations between Iran and Britain hit an all-time low in November 2011, when the two countries shut down their diplomatic missions around Britain’s key role in the imposition of a new set of western sanctions against Iran and its repeated meddling with Iran’s domestic affairs.

Iran recalled all its staff and closed its embassy in London in November after Britain recalled its diplomatic mission in Tehran due to massive protests in front of the British embassy complex by thousands of Iranian students who demanded a cut of ties with London.

The Iranian students’ November protests at the British mission came after the Iranian legislators in an open session of the parliament in November approved the bill of a law on downgrading relations with Britain. After the parliament approval, Iran expelled the British ambassador from Tehran.

The Iranian lawmakers initially started drafting a bill to downgrade ties with London after Britain’s direct involvement in stirring post-election unrests in Iran in 2009, but they intensified and accelerated the move after former British Envoy to Tehran Simon Gass criticized the human rights situation in Iran.

The British government’s blatant stance and repeated remarks in support of the last year unrests inside Iran and London’s espionage operations and financial and media support for the opposition groups are among the reasons mentioned in the bill for cutting ties with Britain.

Iran has repeatedly accused the West of stoking post-election unrests, singling out Britain and the US for meddling. Tehran expelled two British diplomats and arrested a number of local staffs of the British embassy in Tehran after documents and evidence substantiated London’s interfering role in stirring post-election riots in Iran.