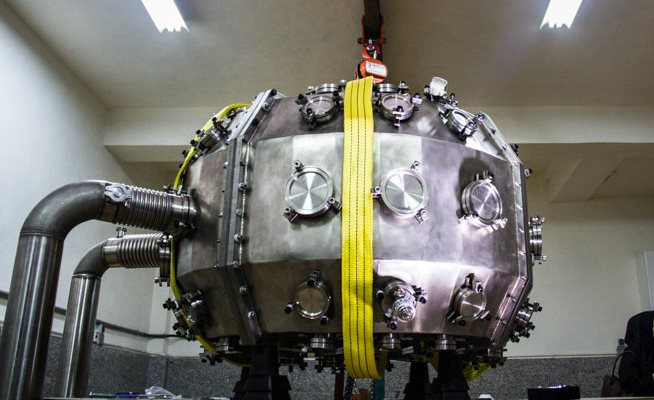 TEHRAN (ISNA)- Iran unveiled the first nuclear fusion plasma confining system locally designed and built by Iranian experts, which is the home-made version of next generations of energy-producing machines.

Tokamaks are used to generate electricity through fusion. All design, simulation and operation phases of Alborz Tokamak are completed by Iranian experts.

The first nuclear fusion device dubbed ‘Alvand’ was jointly built by Iran and Italy in 1985, with 20 percent of its knowhow was accomplished by Iran.

The second one named ‘Damavand’ was purchased from Russia in 1996. Both Alvand and Damavand were launched at the Atomic Energy Organization of Iran (AEOI).

The third one ‘Alborz’ launched in 2005 was purchased from China. It was indigenized at Amir Kabir University.

Alborz Tokamak with 0.45 meter major radius and 0.15 minor radius holds the capacity of 3 KV. No country has managed to get access to this phase, and researchers hope to light the bulbs by this technology.

The project started 3 years ago and has been accomplished by 80 percent.