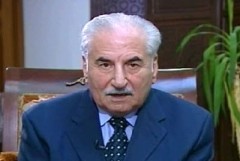 Former  defense minister  General Ali Habib has defected to Turkey  according  to Syrian  sources . His defection was described as  a prelude to a coup against  Syrian president Bashar Al Assad

The sources have reported that Russia will launch an initiative which will  include an agreement to start a transitional phase in Syria, headed by Gen. Habib ,  aimed at   a peaceful solution to the crisis  within  framework of the Geneva Conference 2  and averting the intervention  by the US military  .

Analysts reported in August 2011  that Habib had disagreed with Assad’s regime over the use of force against protesters. For this reason he fired him and replaced  him with General Daoud  Rajha who was killed in an explosion last year.

Also back in August 2011 Israeli Debkafile reported that Habib was found dead at his home with with gunshot wounds from automatic weapons.

Syrian government News agency SANA reported at the time that Habib “has been ill for some time, and his health condition deteriorated recently.”

“Habib was advancing in age and was experiencing health problems but there are reasons to suspect that he may have been assassinated by elements within the Assad regime,” an analysis from Texas intelligence company Stratfor read back in August 2011 when Habib was fired

Habib  is  the most senior army officer to defect so far . Like Assad he  also belongs to the Alawite sect , an offshoot of the Muslim Shiite sect.