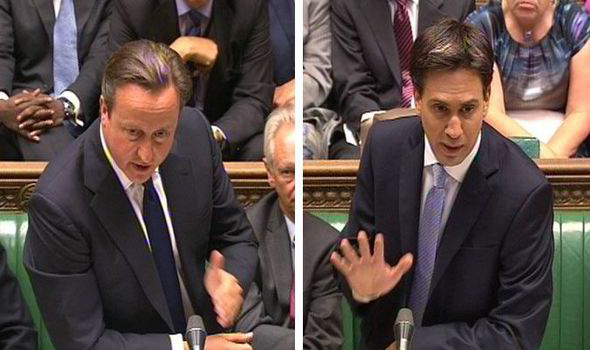 Mr Miliband used the first Prime Minster’s Questions since Parliament’s summer recess to put pressure on David Cameron to work towards a peaceful solution to the Syrian crisis, less than a week after MPs voted against British involvement in military action in the country.

Mr Cameron repeatedly said Iran needed to take responsibility for an attack on the British Embassy in Tehran in 2011, but he would put pressure on all countries involved in the crisis to find a peace agreement.

He said: “If you are trying to build a relationship with someone it depends on the actions they take.

“Given that the Iranian government was complicit in the complete smashing of our embassy and residence in Tehran, we will want to see some actions so we can build that sort of relationship.

“I have reached out by writing to president Rouhani congratulating him on his accession to power and wanting to discuss these issues.

“But I said, if we believe there’s just some magical key to the Syrian conflict by suddenly adopting a totally different posture towards Iran, I don’t think we will be making a very good decision.”

The Prime Minister also said he “respects the outcome” of last week’s vote on military action in Syria, adding: “I won’t be bringing back plans for British participation in military action.

“I agree with you that we must use everything we have in our power – our diplomatic networks, our influence with other countries, our membership of all the key bodies, the G8, the G20, the UN, the EU, Nato – we must use all that influence to bring to bear.

“My only regret of last week is that I don’t think it was necessary to divide the House on a vote that would have led to a vote but he took the decision that it was.”

Mr Cameron said the world still had to take a “very tough response” to the deadly chemical attack on a Damascus suburb blamed on the regime and which the US says killed at least 1,400.

That included aiding rebel forces, he said, so that President Assad was forced to recognise there was “no victory he can win against his own people”.

Mr Cameron said: “I accept that Britain can’t be part and won’t be part of any military action on that front but we must not in any degree give up our utter revulsion at the chemical weapons attacks that we have seen and we must press this point in every forum of which we are a member.”

The UK would also use its “diplomatic muscle” to press other nations to contribute more to aid for refugees, he said, after the UN said the number had passed two million.

Mr Miliband insisted the revulsion at chemical weapons use was “shared on all sides”.

Cameron said Barack Obama had to adhere to his ‘red line’ on chemical weapons
The Prime Minister added he would be expressing the Government’s anger at the use of chemical weapons when the G20 meets tomorrow in St Petersburg, Russia. He said talks had already taken place with Russian president Vladimir Putin on the issue.He said Britain would also use the meeting to try to co-ordinate the international response to help Syria in its “hour of need”.

Britain was also doing everything it could to support Syria’s neighbours, including Turkey and Jordan, with international aid, as well as providing protection to victims of chemical attacks.

Mr Cameron said: “The truth is this – we won’t get a peace process in Syria unless President Assad realises that his regime is under some sort of pressure, some sort of threat, not just from the rebels but from the millions of Syrians who we must be standing up for, who want democracy, who want freedom, who want a better future for their children. It is them whose side we should be truly on.”

Mr Miliband said other countries must match the humanitarian effort Britain has put in to help the Syrian people as the United Nations has less than half the resources it needs.

The Labour leader said there was no difference between his party and the Government on the issue of standing up for the Syrian people.

The issue of Syria dominated Prime Minister’s Questions, and the longest serving MP Sir Peter Tapsell warned American strikes in Syria could trigger “Armageddon”.Veteran Sir Peter, MP for Louth and Horncastle, voted against the Government last week as Mr Cameron was defeated by a majority of 13 on a motion paving the way for a final vote on British military intervention in Syria.

Sir Peter said: “As the Syrian tragedy has unfolded, I’ve always had the Armageddon question in the back of my mind… if the Americans illegally bombard the Assad forces, and Assad legally invites the Russians in to degrade the rebels, what will Nato do?”

Mr Cameron replied: “The first point I would make is that we would never support illegal action. We debated and discussed this at some length last week and it is not the case the only way action can be legal is a UN resolution.

“As I’ve said, Britain would not be taking part in this action but in a way you have to put the Armageddon question the other way, which is that if no action is taken following President Obama’s red line and if no action is taken following this appalling use of chemical weapons, you have to ask yourself what sort of Armageddon are the Syrian people going to be facing?”