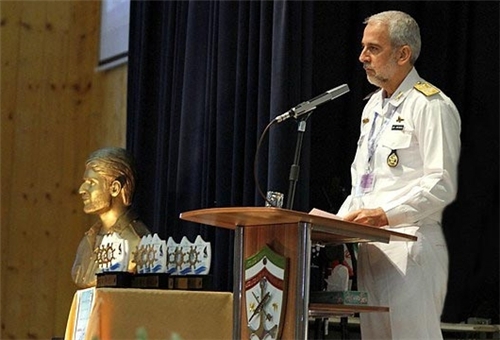 “This radar which has been manufactured by the experts of the country’s defense industry and Navy is currently undergoing (different) tests and will be mounted on some warships of the Navy in future,” Head of the Self-Sufficiency Jihad of the Iranian Navy Rear Admiral Ali Qolamzadeh said on Tuesday.

Commander of Khatam ol-Anbia Air Defense Base Brigadier General Farzad Esmayeeli pointed to the designing and building of new passive phased array radars under the name of ‘Soundless Project’, and said, “The radar is capable of detecting stealth (radar-evading) targets and cruise missiles and enjoys a high movement and mobility capabilities and acts in different ranges.”

In December, a senior Iranian military official announced that Iran has equipped its navy with modern electronic warfare systems and radar equipment in a bid to boost its capabilities in sea warfare.

“Given the fact that equipping units with electronic warfare systems is the first need and requirement in sea battles, the Islamic Republic of Iran’s Navy has equipped all its surface and subsurface units with these systems,” Spokesman of Velayat 91 Naval Wargames Rear Admiral Amir Rastegari said.

Addressing the second conference on radar technology systems here in Tehran at the time, Vahidi said Iran has witnessed “a jump” in the field of radar designing and manufacturing.

“Today, we have many achievements in different fields. Radars covering ranges of 500km to 700km have been manufactured and production of radar systems with 1,000km to 3,000km of range is underway,” Vahidi explained.