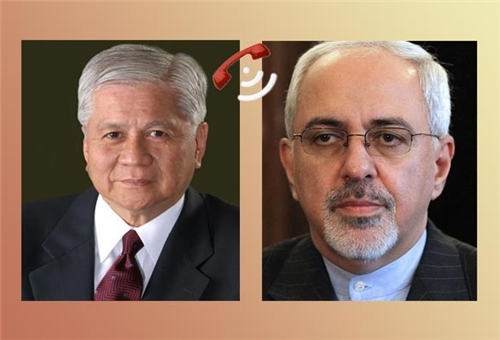 TEHRAN (FNA)- Iranian and Filipino foreign ministers, in a phone conversation, discussed the latest developments in the region, particularly the crisis in Syria.

In the phone call with his Filipino counterpart Albert del Rosario, Iranian Foreign Minister Mohammad Javad Zarif warned the West of the grave consequences of the military intervention in Syria, stressing that resorting to force is totally illegal and disruptive to international security and peace and will deepen crisis in the Middle-East.

Rosario, informed about the current sensitive situation in the Middle-East and necessity of examining all aspects of the existing problems, asked for continuation of political consultations between the two countries to that end.

The US should know that it will not benefit from military action against Syria, Asafari said, adding that Israel will be the first victim of a potential war against Syria.