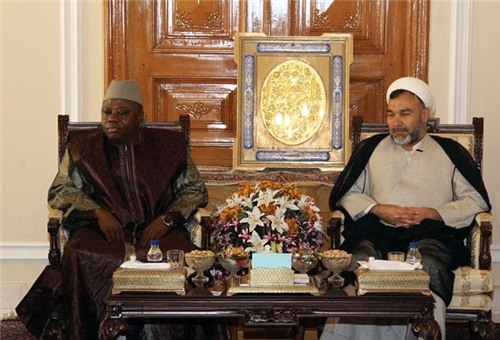 TEHRAN (FNA)- Senior Iranian and Sierra Leonean legislators in a meeting in Tehran on Tuesday underlined the need for the further bolstering and consolidation of the relations between the two countries, specially in parliamentary fields.

During the meeting in Tehran today, senior MPs Hassan Sobhaninia and Ibrahim Bundu explored avenues for bolstering and reinvigorating bilateral ties and mutual cooperation, specially between the two countries’ legislatures.

Sobhaninia pointed to the current status of Iran-Sierra Leone relations, and said that parliamentary cooperation plays an important role in the enhancement of Tehran-Freetown ties.

The Sierra Leonean lawmaker, for his part, voiced his gratitude for visiting Iran and becoming familiarized with the Islamic Republic’s achievements in different areas, including the economic and agricultural sectors, and said, “Iran’s assistance in agriculture, health and urban development has played an important role in resolving the problems of the Sierra Leonean nation.”

Bundu, heading a high-ranking delegation, arrived in Tehran on Tuesday to meet with a number of Iranian officials and lawmakers.

During their stay in Iran, the Sierra Leone delegation will meet with Iranian Parliament Speaker Ali Larijani and ministers of Agricultural Jihad, road and labor.

Sierra Leone, with a population of six million, is a country in Western Africa and its capital city is Freetown. The official language of Sierra Leone is English.

Last month, Sierra Leonean Foreign Minister Samuel Kamara in a meeting with Iranian President’s Chief of Staff Mohammad Nahavandian stressed his country’s enthusiasm for the enhancement of relations with Tehran.

“Freetown is keen to strengthen ties with Tehran,” Kamara said during the meeting in Tehran in August.