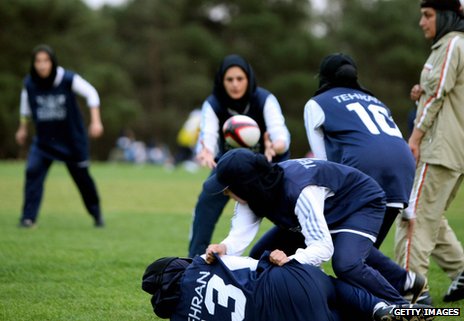 Several sites and a dedicated Facebook page published photos from the national sevens tournament, leading posters to debate the appropriateness of the kit. Conservative website Bultan News questions whether the competition is appropriate, asking: “Do we really have to have a professional women’s rugby league?” It was in turn criticised by readers for publishing images of the sportswomen. One reader asks whether the site’s “values” have changed and calls for the country’s religious leaders, the Ayatollahs, to issue fatwas – or religious decrees – on whether the kit is un-Islamic.

Others argue there’s nothing wrong with it. “You can take these images to the Ayatollahs but be sure they will have no issue, according to Islamic law,” says one, while others applaud the nine teams for showing that Iranian women can compete professionally unhindered by the dress code. “You’re being too zealous. Did you expect them to turn up to practice wearing a chador (a long, cape-like veil)… Good on them, they’ve upheld their hijab (headscarf) and played sport too,” said a poster on Parsine website.