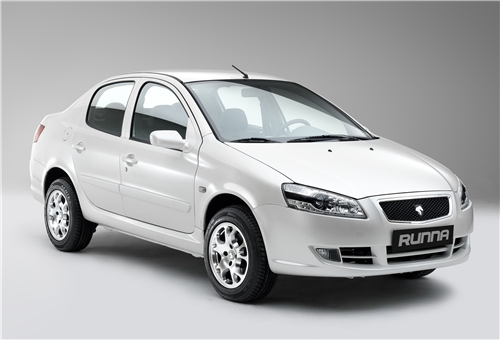 “During the said period, IKCO exported 34 Runnas to Ukraine and Kazakhstan for the first time,” he continued.

This sedan is going to be powered by TU5 and EF7 engines that meet Euro IV standard requirements. The car would be available with diesel engines later.

IKCO Runna enjoys front seat airbags and ABS and meets the required safety standards for driver and passengers, covering the European pedestrian impact safety standard as long as the standard has been instituted and introduced in Europe. The car can also gain three star rating by Euro NCAP.

Besides the Iranian market, the Middle East, Russia, Turkey, Africa and South American countries have been targeted by IKCO Runna.

Given the fact that the intellectual property of Runna belongs to IKCO, the company intends to further diversification of the car models and produce the hatchback type too.

Runna is IKCO’s second self-developed car, designed and developed by Iranian engineers without any help from foreign sources.

Runna has been designed to develop IKCO brand and platforms. The car meets global most recent standard requirements in emission, safety, durability and quality.

IKCO plans to produce hatchback Runna in Belarus, Azerbaijan, Egypt, Syria, Senegal and Venezuela as well as Iran’s domestic production plants. The company intends to export the car to the Middle East and West of Asia, Russia and CIS region countries, West and North Africa and South America.