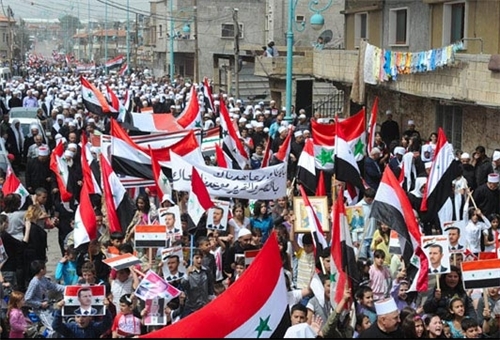 Ankara, Aug 31, IRNA – Iran’s Ambassador to Syria Alireza Bigdeli said western countries led by the US are fanning the flames of crisis in Syria to dominate the Middle East region and confront the Islamic awakening waves.

Talking to IRNA, he said Iran believes that situation in Syria should not be looked upon as a crisis because it is only one part of a chain of transitional global developments.

He said those who fail to understand the true nature of this big game will certainly make mistakes in assessing incidents in Syria.

Stressing that the western countries are currently in the region only to safeguard their interests, the ambassador noted that the West has already used any tool to confront changes in the region by both creating problems inside countries and sowing discord among regional nations.

Pointing to the allegations made against the Syrian government accusing it of alleged use of chemical weapons, he condemned using such fatal weapons by any one and under any excuse.

While investigation on the use of chemical weapons in Syria is still underway, western countries are continuing an extensive psychological war to push the country towards military intervention, the envoy reiterated.

Describing as unacceptable any kind of military action in Syria, Bigdeli stressed that such an attitude has been rejected by many countries because it will mean putting the region in flames of war which will virtually have no benefit for the West.

Noting that the continued crisis in Syria will undermine the whole region, he said western countries are just trying to protect their interests.

There is no military solution to the Syrian crisis, he said, underlining the need for consolidation of unity among regional states to resolve the crisis.

Iran and Turkey can play key roles in seeking a peaceful settlement for the crisis, he said, adding that the two countries can help solve all the existing problems in the region through cooperation.

The two neighboring states are able to neutralize Wests conspiracies aimed at sowing discord among Muslim nations, he emphasized.