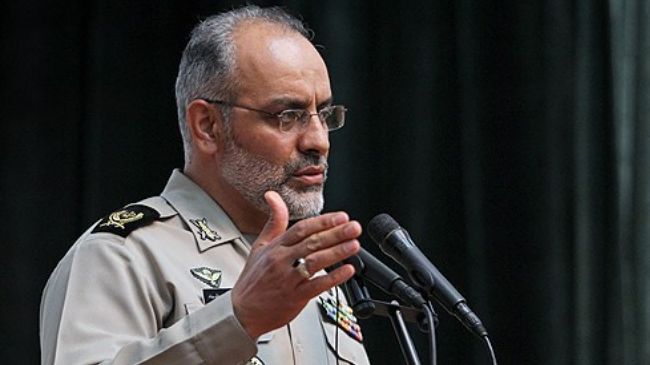 A senior Iranian Army commander says recent threats of war against Syria are part of the West’s “psychological warfare” against the government of President Bashar al-Assad.

“All the remarks made regarding a military option against Syria is psychological warfare,” Brigadier General Hossein Valivand stated on Friday.

Valivand said the United States and other Western powers have resorted to threats of war to pressure the Syrian government and people, given the failure of foreign-backed Takfiri groups like al-Nusra Front to topple the Assad government.

“Among the goals of this propaganda and psychological warfare are winning concessions from Syria and countries backing it [on the one hand], and responding to pressures [exerted on the part] of the Zionist regime [of Israel] on the other hand,” he noted.

The commander, however, voiced confidence that the Syrian Army and people will foil the US-Israeli scheme.

The remarks come as the war rhetoric against Syria following an alleged chemical attack on the suburbs of Damascus on August 21 gains momentum.

Syria militants and foreign-backed opposition accuse the Syrian government of carrying out the attack, a claim Damascus has strongly rejected.

China, Iran and Russia, among other countries, have warned against any foreign military intervention in Syria, which has been gripped by deadly unrest since 2011.

In addition, people around the world have staged demonstrations against the US threats of war against Syria.

Anti-war protests were also held in several cities across the US on the same day, including Washington, Los Angeles and Chicago. In New York City, supporters of the Syrian government gathered at Times Square chanting slogans against the US warmongering policies.