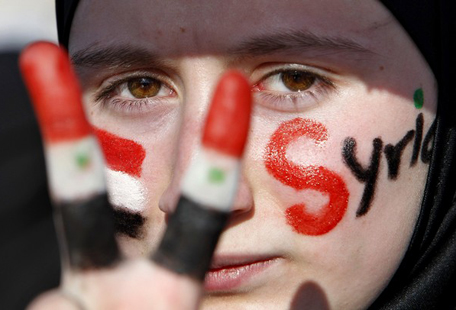 The deputy head of the armed forces, Masoud Jazayeri, declared that Israel will “burn” if the Assad regime is attacked:

In case of a military action by the anti-Syria front, the Syrian nation will resist and the result of their resistance will be victory….

What is currently referred to as the US and Britain’s military action against the innocent Syrian nation is in fact a Zionist operation aimed at boosting the morale of the occupying and dying Zionists.

Alaeedin Boroujerdi, the chair of Parliament’s National Security Committee, asserted that Israel would suffer a “much graver loss” than its “defeats” in the 2006 war in Lebanon in the summer of 2006, and last November’s eight-day conflict in Gaza:

Given the sensitivities in the region and the critical situation imposed on Syria particularly the use of chemical weapons by terrorists, any further warmongering in the country will have dire consequences for the US and the Zionist regime.

On the diplomatic front, Press TV reports that Foreign Minister Mohammad Javad Zarif spoke with several European counterparts. The outlet insists, “The Italian and Swiss foreign ministers, Emma Bonino and Didier Burkhalter, said their countries are against any military strike on Syria.”

The two presidents stressed that any use of military force against another country without a mandate from the United Nations is a blatant violation of international law.