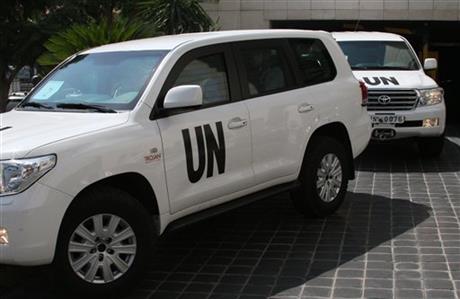 DAMASCUS, Syria (AP) — U.N. chemical weapons experts who are investigating an alleged poison gas attack near Damascus left their hotel Wednesday, and two anti-regime activists said the team was expected to visit an eastern suburb of the capital affected by the strike.

Russian Foreign Minister Sergey Lavrov warned Wednesday that armed intervention by the U.S. and its allies “will lead to the long-term destabilization of the situation in the country and the region.”

Russia is a staunch ally of Assad’s regime, along with Iran and China.

U.S. Secretary of State John Kerry has said there was “undeniable” evidence of a large-scale chemical attack likely launched by Assad’s regime. His comments earlier this week laid out the clearest argument yet for U.S. military action in Syria.

Syria has denied it was behind the alleged attack and challenged Washington to present proof to back up its accusations.

The U.N. chemical weapons experts conducted their first field testing in a western Damascus suburb on Monday. They came under sniper fire while en route and escaped unharmed, but put off their second trip, initially set for Tuesday.

The team looked at a map, but did not speak to reporters.

Two Syrian anti-regime activists, speaking on Skype, said the team was headed to the eastern Ghouta suburb of Damascus, one of the areas affected by the purported strike. They spoke on condition of anonymity for fear of regime retribution.

The U.N. team traveled Monday to the western suburb of Moadamiyeh, where they collected samples and testimony after a treacherous journey through government and rebel-held territory. Their convoy was hit by snipers but members of the team were unharmed.

In Geneva, U.N. spokeswoman Alessandra Vellucci told reporters that the inspection team might need longer than the planned 14 days to complete its work and its priority now is to determine what chemical weapons might have been used.