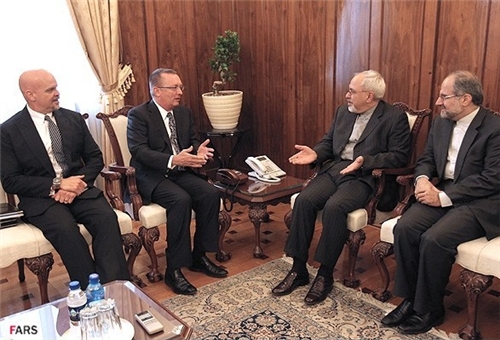 (Reuters) – A top U.N. official visiting Iran has urged it to use its influence to persuade the Syrian government to attend planned peace talks with opposition groups in Geneva, the United Nations said on Tuesday.

Under-Secretary-General for Political Affairs Jeffrey Feltman has spent the past two days in Tehran meeting officials, including Foreign Minister Mohammad Javad Zarif, to discuss trying to reach a political solution in Syria.

“Mr Feltman shared the U.N. position that Iran, given its influence and leadership in the region, has an important role to play and a responsibility in helping to bring the Syrian parties to the negotiating table,” U.N. spokesman Farhan Haq said.

The Syrian conflict has split the Middle East along sectarian lines. Shi’ite Muslim Iran has supported Syrian President Bashar al-Assad and his Alawite minority against mainly Sunni rebels, some of them Islamists, who have backing from Gulf Arab states.

Russia and the United States have been trying since May to organize an international peace conference to bring an end to two years of violence inSyria in which more than 100,000 people have died. Hopes are fading that the conference can take place any time soon.

Feltman discussed with Iranian officials “the worsening situation on the ground in Syria, including the U.N.’s grave concerns about the potential use of chemical weapons and how the U.N. can work together with Iran and other states to end the bloodshed and suffering of the Syrian people,” Haq said.

Western powers are preparing for a possible attack against Syria to punish Assad for alleged poison gas attacks against civilians.