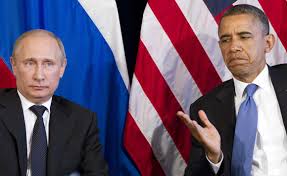 US cancels Syria meeting with Russia

TEHRAN (FNA)- The United States postponed a meeting with Russia on the Syrian crisis, as Washington appeared to be positioning for a potential military strike.

“Given our ongoing consultations about the appropriate response to the chemical weapons attack in Syria on August 21,” Washington has decided to postpone Under Secretary Wendy Sherman and Ambassador Robert Ford’s meeting with a Russian delegation that was scheduled for this week in the Hague, a senior State Department official said on Monday, Al-Alam reported.

“We will work with our Russian counterparts to reschedule the meeting. As we’ve long made clear – and as the events of August 21 reinforce – it is imperative that we reach a comprehensive and durable political solution to the crisis in Syria,” the official stressed.

The United States said Sunday there was “very little doubt” Syrian forces had used chemical weapons in the country, and dismissed an offer by Damascus for a UN team to view the attack site.

The comments marked a significant escalation of a showdown over the alleged attack outside the Syrian capital and came as Washington appeared to be positioning for possible military action. Syria rejects the claims.

Officials said President Barack Obama, who held crisis talks Saturday with top aides, would make an “informed decision” about how to respond to an “indiscriminate” chemical weapons attack.

However, President Bashar al-Assad declared that any strike by the US and its allies would be doomed to failure and key ally Moscow warned of dangerous consequences for the entire region.

Assad, in an interview with a Russian newspaper published Monday, denied such accusations as an “insult to common sense” and said any military action was doomed to fail.

With China and Moscow expected to boycott any resolution backing a military strike, British Foreign Secretary William Hague said the West could act even without full UN Security Council backing.