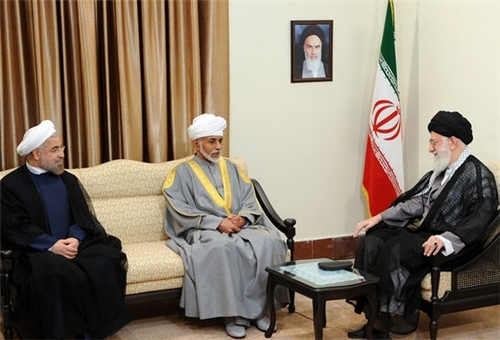 TEHRAN (FNA)- Supreme Leader of the Islamic Revolution Ayatollah Seyed Ali Khamenei took the trans-regional states responsible for the current crises in the region, and warned that those who support the Takfiri groups which are fighting against the regional people will taste the flavor of insecurity in the end.

“The main reason behind the status quo in the region is the different interferences done from outside the region,” Ayatollah Khamenei said in a meeting with visiting Omani King Sultan Qaboos in Tehran on Monday.

He warned about the use of religious and sectarian issues as a pretext for sparking political disputes among countries, and said, “Unfortunately, a Takfiri group has been formed with the support of certain regional states which is in conflict with all Muslim groups, but supporters of this stream should know that this fire will burn them too.”

Ayatollah Khamenei described the current regional conditions as sensitive and dangerous, and called for further cooperation and coordination between Iran and Oman on regional issues.

The Omani king arrived in Tehran on Sunday to meet with senior Iranian officials on bilateral ties and regional issues.

Sultan Qaboos, who is the first foreign leader visiting Iran since President Rouhani ascended to power, is heading a high-ranking political and economic delegation during his three-day visit to Iran.

Iranian officials have repeatedly underlined that they attach great importance to the consolidation of Tehran’s relations with the Middle-East countries in a move to protect and promote peace and security in the region.