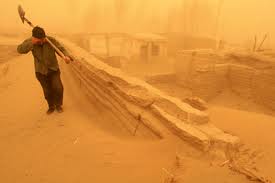 Sistan-Baluchistan villages under siege by sandstorm

A sandstorm with winds gusting up to 100 kilometres an hour has hit scores of villages in Sistan-Baluchistan.

Mehr News Agency reports that Red Crescent officials in the southeastern Iranian province are working hard to clear the way and rescue residents.

The Hirmand governor reports that 35 villages are inaccessible due to the sandstorm and 30 homes in the area have been completely buried.

The Zehek governor also reports that 57 villages are now under siege by the sandstorm.

Sand and dust storms are a major problem in Sistan-Baluchistan, and many have cited the drying out of Hamoon Lake as one of aggravating factors.