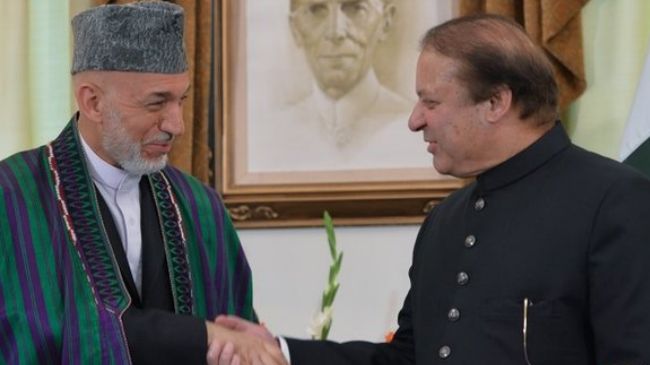 Afghan President Hamid Karzai has called on Pakistani authorities to facilitate controversial peace talks between his country and the Taliban.

During a brief visit to Islamabad on Monday, Karzai said the Pakistani government could provide opportunities for talks between the Afghan High Peace Council and the militants, adding that a joint fight against militancy is needed and that he has pinned great hopes on Pakistani Prime Minister Nawaz Sharif.

In response, Sharif said he wanted to help regional efforts to stabilize Afghanistan.

Afghan President Karzai is visiting Pakistan for key talks with the new government over peace negotiations with the Taliban. Afghanistan is seeking help from its neighbor to open up a direct channel of communication with Taliban militants.

The Afghan leader has met with Sharif in Islamabad. Sharif has been an advocate of peace talks with Taliban militants since his election campaign which ended in his May victory.

The Taliban have so far refused to contact the Afghan government because they consider Karzai a US puppet. The Afghan High Peace Council has been making efforts to initiate dialogue with discontented Afghans and militants who have engaged in warfare with the US-led forces and Kabul’s Western-backed government.

Afghanistan believes that Taliban safe havens in Pakistan are the main cause of increased violence in the country.

The relations between Kabul and Islamabad are also traditionally mired in distrust. Afghanistan and Pakistan blame each other for the Taliban violence plaguing both countries.

Karzai’s previous visits to Pakistan have been fruitless, but this time he’s hoping for favorable results.

“I will travel to Pakistan hoping to get a result out of it. I’m hopeful, but not sure, I will only go with hopes, and wish they materialize,” he had told reporters before flying to Islamabad.

The trip signals a desire by both countries to overcome years of distrust and hostility, and to foster stability.

Over a decade of the costly US-led war in Afghanistan has failed to end militancy in the country and the US which has thousands of troops on the ground in Afghanistan is now trying to sit down for talks with Taliban militants.