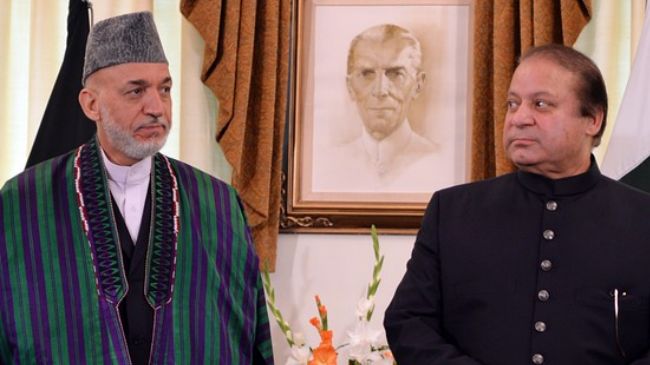 “We have always supported bilateral and multilateral negotiations among regional countries to resolve current problems and achieve peace and stability in the region,” Araqchi said on Monday.

“As we have repeatedly announced and [as] experience has shown, we believe that any plan and roadmap imposed from outside the region will not only fail to provide the interests of regional countries but will also endanger regional peace and stability by further complicating the situation,” the Iranian spokesperson stated.

He added that issues of Pakistan and Afghanistan, as two immediate neighboring countries of Iran, have always been a matter of concern for the Islamic Republic.

Afghan President Karzai arrived in the Pakistani capital on Monday for key talks with the new leaders of the country over peace negotiations with the Taliban.

Afghanistan is seeking help from its neighbor to open up a direct channel of communication with Taliban militants.

The Afghan president met with Pakistani Prime Minister Nawaz Sharif in Islamabad. Sharif has been an advocate of peace talks with Taliban militants since his election campaign which ended in his May victory.

The trip signals a desire by both countries to overcome years of distrust and hostility and to foster stability.

Over a decade of the costly US-led war in Afghanistan has failed to end militancy in the country and the US which has thousands of troops on the ground in Afghanistan is now trying to sit down for talks with Taliban militants.