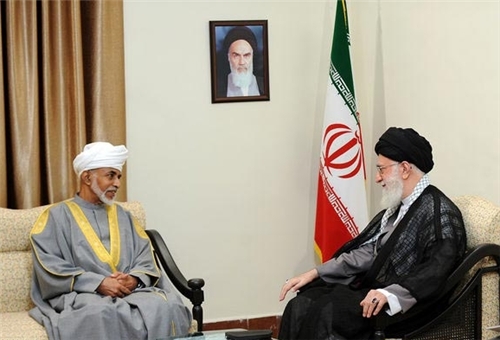 TEHRAN (FNA)- Supreme Leader of the Islamic Revolution Ayatollah Seyed Ali Khamenei warned about the major threat posed by Israel’s nuclear arsenals to the global peace and security, and once again called for the establishment of a nuclear-free Middle East.

“Having vast WMD (Weapons of Mass Destruction) arsenals, the corrupt Zionist regime is highly dangerous and a serious threat to the region,” Ayatollah Khamenei said in a meeting with visiting Omani King Sultan Qaboos in Tehran on Monday.

He also blasted the US for its all-out and blind support for Israel which is perceived as a permanent danger to the region.

“The region needs overall security and this important goal will be materialized merely by the declaration of a real ban on the WMDs,” Ayatollah Khamenei said.

Sultan Qaboos, for his part, expressed his confirmation of Ayatollah Khamenei’ remarks on the Zionist regime’s threat, and said, “Ending the current conditions requires attention to the regional people’s interests and cooperation among the regional countries.”

The Middle-Eastern states have repeatedly cautioned that Israel’s nuclear arsenal poses a threat to Middle East peace and security. Israel, which has hundreds of nuclear warheads, avoids joining the nuclear Non-Proliferation Treaty (NPT).

Iran, an NPT-signatory, has repeatedly asked for Israel’s disarmament and removal of all weapons of mass destruction from across the globe.

Despite Iran’s compliance with the NPT, Washington and its western allies accuse the country of trying to develop nuclear weapons under the cover of a civilian nuclear program, while they have never presented any corroborative evidence to substantiate their allegations. Iran denies the charges and insists that its nuclear program is for peaceful purposes only.

Political observers believe that the United States has remained at loggerheads with Iran mainly over the independent and home-grown nature of Tehran’s nuclear technology, which gives the Islamic Republic the potential to turn into a world power and a role model for the other third-world countries. Washington has laid much pressure on Iran to make it give up the most sensitive and advanced part of the technology, which is uranium enrichment, a process used for producing nuclear fuel for power plant.